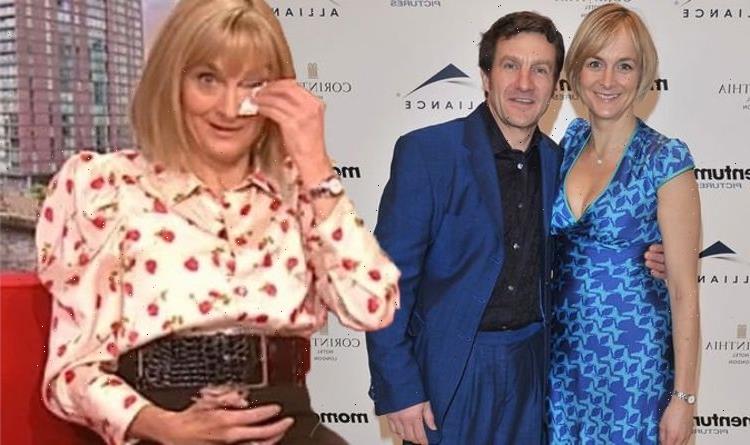 Louise Minchin talks about recovering from her foot injury

Louise Minchin, 53, was filming her final Wednesday BBC Breakfast episode on 15 September when her family came into the studio to surprise her. During her emotional farewell, Louise’s husband David praised his wife for her “bravery” after all the “pain she’s gone through”.

During Louise’s last episode of BBC Breakfast, which featured a brass band and beaming crowd of her BBC colleagues, co-presenter Dan Walker announced: “Can we ask the next two mystery Minchins to come forward, please!”

At this point Louise’s beloved husband David and doting dad Patrick emerged from the crowd, causing Louise to cry out “Oh!” before bursting out laughing.

David apologised to his wife for “unashamedly lying” to her the night before, as he had denied being involved in any part of her leaving do.

Louise’s husband did not hold back in praising his wife, both for her tireless work on BBC Breakfast and for her incredible triathlon efforts.

He said: “I’m in awe, so courageous. The bravery, I mean just the challenges she’s taken on, all with a giggle and a smile on her face.”

“And I’ve seen some of the pain that she’s gone through, and the operations, and she’s just been brilliant.

“So adventurous, so courageous. I’ve learnt a lot, and I think she’s learnt a lot but it’s been such fun.

“And thank you to the show for really leading us down that path.”

Louise’s father Patrick added that he was “immensely proud” of Louise for all her hard work.

“I mean what can you think, for a dad to have a daughter perform such a fascinating role for twenty years. Immensely proud,” he concluded.

Louise, who is set to appear on celebrity special of The Chase this Saturday, underwent surgery in December last year after sustaining an injury during a triathlon in 2019.

The star had an operation on her foot and has since admitted that her recovery has taken much longer than she had anticipated.

Shortly after departing from BBC Breakfast Louise shared a candid video to her Instagram about how she was feeling after the operation.

“I can’t believe it’s nearly a year since I did my last marathon and since then I’ve had a foot operation,” she told her 91,000 followers.

“And to be honest with you it’s taken me way longer than I’d hoped to get back to running any kind of distance,” she added.

In a post on September 30, she seemed more positive, however, writing: “I am just about back to 5k and hoping to head to 10k and then fingers crossed beyond.

“Coming back from an injury or just starting at all is difficult, but I find knowing how long or far I have run hugely encouraging and LOVE that my watch tells me how long I need to recover!

“I love the way that running gives me an excuse to be outside and think,” she continued, adding the hashtag: “#getoutside”.

Following her exit from BBC Breakfast, The Sun reported that Louise has been approached to take part in this year’s series of I’m A Celebrity…Get Me Out Of Here!, which starts Sunday, November 21.

Louise is set to appear on The Chase Celebrity Special this Saturday at 8:30pm on ITV.