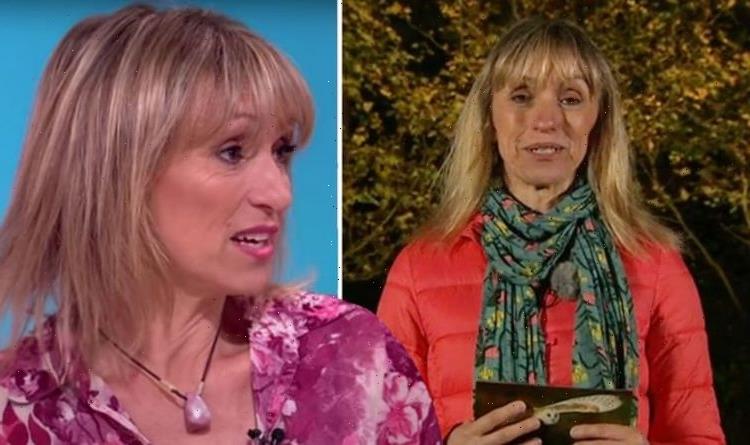 Autumnwatch’s Michaela Strachan lives in South Africa but is currently staying in the UK to film for the latest BBC series with Chris Packham and their co-stars. Taking to her Twitter last night, the 55-year-old said she was woken up by police officers banging loudly on her door.

She wrote: “Just had such a fright. Was woken up at 12.30 to 3 police officers hammering on my hotel room door!

“App someone had rung them saying they were being attacked and given them my room number!(sic)

Michaela went on to say that only few people knew which hotel she was staying in, so doesn’t believe it was anything more than a mix-up.

“I think it’s random rather than personal,” she added.

“Perhaps it was a genuine call but they gave the wrong room number or a random prank.

“Either way, it’s unsettling. The police were extremely polite.”

Chris wrote: “Very unsettling and worrying though for you. Enjoying the show, keep it up.”

Cate Megam Russell commented: “So sorry to read this.

“I hope everything will be fine with wherever you are staying and working this evening.”

Lorralee Dobrijevic added: “Eek! Wouldn’t have liked that one bit!”

It’s not the first unsettling experience the presenter has dealt with in recent months.

Back in August, she told fans her dogs Rio and Timmy fell ill after being poisoned by Crystal Meth back home.

The presenter shared a picture of her two rescue pooches, one awake and one asleep, wrapped up in blankets.

She explained: “After walking my dogs through a ruined fort on the mountain yesterday, a few hours later they looked like they were both having seizures and couldn’t stand up.”

Michaela rushed her dogs to the vet, who recognised the symptoms as an overdose of a drug called Tik (Crystal Meth).

She added: “Apparently the ruined fort is where a lot of homeless people hang out and take Tik, so the dogs must’ve eaten human poo with Tik in it!”

The Autumnwatch regular went on to say she had nursed her dogs through their “hectic trips as they shook, twitched, vomitted and peed”.

Thankfully, the dogs were back to their usual selves the following day.