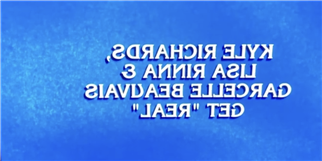 Today in the cross-section of you and your grandmother’s interests: The Real Housewives were recently the subject of a Jeopardy! clue, causing incredible amounts of confusion among contestants who apparently don’t know their Beverly Hills from their Orange County.

Per Entertainment Tonight, the clue was “Kyle Richards, Lisa Rinna and Garcelle Beauvais get ‘real.'” One contestant answered “who are The Real Housewives,” but, alas, when asked to be “more specific,” they said “Of Orange County?”

Kyle shared the clip with the caption “I love @jeopardy 🙏❤️ #BeverlyHillsbaby 😜,” and her co-stars reposted the moment. As Garcelle put it, “You know you’ve made it! @jeopardy 😂”

Jeopardy! obviously has a huge fan base and has been on since the dawn of time, but apparently not all contestants are Bravo viewers. Huh! Strange! Anyway, Mayim Bialik is the host’s new show, and recently told ET “It’s changed my life in enormous ways” while also noting that “people have a lot of opinions.” Specifically about what she wears.

“It’s very interesting to me, you know, to say, ‘Well, gosh, what should I wear?’” she explained. “Alex wore a different suit every single show but people didn’t think about it that much because it was navy, or it was gray. Whereas I might wear colors sometimes and you might recognize that jacket because we also have a budget. [But] it’s not about what Mayim Bialik’s wearing, it’s about these contestants and, like, all the random, amazing things that they know.”

That said apparently the internet spiraled when Mayim repeated a blazer, which you can read all about here:

06/15/2022 Celebrities Comments Off on In Which 'Jeopardy!' Contestants Are Extremely Confused By a 'Real Housewives' Question
Recent Posts