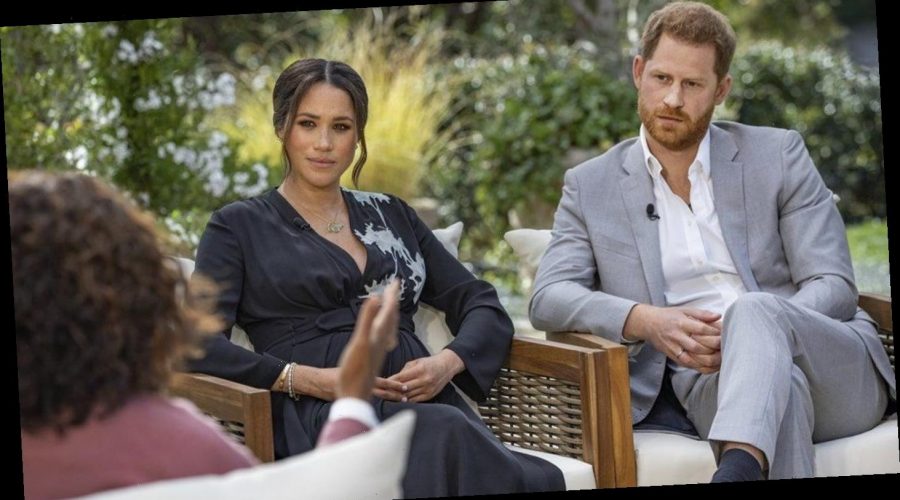 Weeks of media hype reached a crescendo Sunday when CBS aired Oprah WInfrey’s interview with Prince Harry and Duchess Meghan, who said she was so close to suicide during her time in the palace that she couldn’t be left alone.

She couldn’t get any help from “the institution” of the monarchy, because she wasn’t an employee, she was told. She couldn’t just check into a hospital because that wouldn’t look good. “You can’t just call an Uber to the palace,” she half-joked. She even consulted one of the late Princess Diana’s close friends, because “who else would understand what’s it’s like on the inside” of the royal family?

“I can’t be left alone, I’m afraid of what I might do,” she said, starting to cry.

Other revelations in a first hour full of bombshells included that she and Harry actually were married three days before their 2018 wedding, by the Archbishop of Canterbury in their backyard.

That rumor that Meghan made her sister-in-law, Duchess Kate of Cambridge, cry in a dust-up before the wedding? Not true; in fact, it was the other way around, Meghan told Winfrey, who asked her about the story that whirled around the internet six months after the wedding.

Meghan didn’t want to reveal too many details of the incident, because “she (Kate) is a good person” and she wanted to protect her privacy.

Kate ‘made me cry,’ Meghan says

“She made me cry, it hurt my feelings,” she said. “But it was a really hard week before the wedding. She was upset and apologized and brought flowers, and wrote a note. I’ve forgiven her. What’s hard to get over is that I was being blamed for something I didn’t do but happened to me.”

Everyone in the palace knew it wasn’t true, she said. “Why not say that?,” Winfrey asked. “Good question,” she replied.

The couple also revealed that their second baby, due in the summer, will be a girl, a sister for Archie, who turns 2 in May.

“Having a boy and then a girl: What more could you ask for?” said Harry, who  had joined Meghan for the interview.

In another revelation, Meghan told Winfrey that she and Harry did not choose to forego a title for baby Archie. She said she was told that the rules prevented it, at least until his grandfather ascended the throne.

But she shocked Winfrey when she said they were told that the baby could not get royal security without a title, and said unnamed palace officials raised “concerns” about the color of the baby’s skin.

Concerns about ‘how dark’ Archie’s skin would be

“In those months when I was pregnant, and at the same time there was talk about no title, no security, and also conversations about how dark his skin might be when born,” she said. Who is saying that, Winfrey demanded. Meghan wouldn’t say because “that would be very damaging to them.”

The couple also denied “blindsiding” Harry’s grandmother, Queen Elizabeth II, with their plan to step back from senior working royal roles. “I have too much respect for her,” Harry said.

He said they left because they were refused support after asking for help, and because of a constant “barrage” of media criticism. Harry said he was afraid of “history repeating itself,” referring to the experiences of his mother, the late Princess Diana.

When asked how Diana would view what has happened with her younger son and his wife, Harry replied:  “I think she would feel very angry with how this has panned out and also very sad. All she’d ever want is for us to be happy.”

London’s feisty tabloids have been critical of the Duke and Duchess of Sussex since just after their May 2018 wedding, but their coverage turned especially venomous after the couple announced in January 2020 they were stepping back from their working royal roles and leaving London; they moved to an estate in Santa Barbara, California, near Winfrey’s own estate, last March.

But the shouting over Harry and Meghan and their date with Winfrey amped up to ugly this week, with the revelation of two-year-old allegations of “bullying” by Meghan, and her accusation in the interview that she and Harry have been the victims of “falsehoods” spread by palace enemies.

Palace pushes back ahead of interview

Four days before the interview aired, The Times of London, a more staid but still conservative paper, weighed in with a report that said Jason Knauf, the American-born former press secretary for Harry and Meghan, made an official complaint in October 2018 to his palace bosses, accusing Meghan of “bullying” her staff, driving “two personal assistants out of the household and…undermining the confidence of a third staff member.”

Prince Harry and Duchess Meghan of Sussex sat down with Oprah Winfrey in the backyard of their California home for a two-hour interview airing March 7 on CBS. (Photo: Joe Pugliese/Harpo Productions)

Meghan responded with a statement that she is “saddened by this latest attack on her character, particularly as someone who has been the target of bullying herself.” Meghan, a former actress who’s American and biracial, has been targeted by racist social-media posts since she emerged as Harry’s girlfriend in 2016.

Her lawyers angrily responded to The Times, accusing the Rupert Murdoch-owned broadsheet of a “calculated smear campaign” against the duchess.

Buckingham Palace then issued a statement of “concern,” promising to launch an investigation of the allegations in The Times and stressing that royal employers do not tolerate bullying. The palace did not explain why it never investigated the 2018 allegations, or what power it has punish Meghan if they prove true.

Oprah Winfrey on April 7, 2015 at the Warner Theater in Washington, DC. Prince Harry and his then fiancée, actress Meghan Markle, at a Commonwealth Day Service at Westminster Abbey on March 12, 2018. (Photo: NICHOLAS KAMM, AFP via Getty Images)

Meanwhile, in the week leading up to the interview, CBS released multiple promos featuring clips from the sit-down, provoking more critical stories and more Twitter shouting. One clips showed Winfrey asking the duchess: “How do you feel about the palace hearing you speak your truth today?”

“I don’t know how they could expect that after all of this time we would still just be silent if there is an active role that The Firm is playing in perpetuating falsehoods about us. And if that comes with risk of losing things – I mean, there’s a lot that’s been lost already,” Meghan says pointedly.

This reference caused an uproar. Brits understand the “The Firm” to mean the royal family, so critics such as breakfast show co-host Piers Morgan accused Meghan of calling her in-laws liars.

But she may have meant senior officials in the palace bureaucracy – the “men in grey suits,” as exasperated Princess Diana once called them – whom  Meghan believes have lied and leaked about her to unfriendly media for years.

The interview aired just days after widespread demands in London for CBS to cancel or postpone the program due to the illness of Prince Philip, Harry’s 99-year-old grandfather. He’s been in London hospitals since Feb. 16 and had a successful heart procedure this week, but he’s expected to remain hospitalized for several days.

Last month, Harry gave a preview of sorts to the Winfrey interview during a taped appearance on his pal James Corden’s “The Late Late Show” on CBS: Harry said he and Meghan stepped back from royal life because “toxic” British media coverage was damaging his mental health. He said they intend to continue their “public service” in the U.S.

“We all know what the British press can be like. And it was destroying my mental health,” Harry told Corden. “I was like, ‘This is toxic.’ So I did what any husband and father would do… I need to get my family out of here.”

Harry, 36, grandson of Queen Elizabeth II, and the former Meghan Markle, 39, traded their royal roles in London for new lives as budding Hollywood moguls, living in a luxury estate in Montecito, near Santa Barbara, preparing for a second, American-born baby, and taking more control over their finances, privacy, public activities and media image.

Prince Harry told James Corden what led to his and Meghan Markle's departure from the royal life.

Their transformation set off another royal crisis, similar to the one that ensued when the marriage of Harry’s parents, Prince Charles and Princess Diana, disintegrated in the toxic “War of the Waleses” in the 1990s. Only now, the Sussexes and their supporters joust with tabloid scolds, royal commentators, anonymous palace courtiers and Twitter trolls in tit-for-tat official statements and social media posts.

CBS’ announcement last month that Winfrey, the Sussexes’ friend and champion, would interview them for a prime-time special, launched a tsunami of mostly critical media coverage in the U.K.,especially after Winfrey vowed that no subject would be off the table and promised “shocking” revelations.

Some tabloid websites, such as the Daily Mail, posted up to a dozen different stories per day, many of them depicting Meghan in a bad light. Stories about how she bombarded staff with emails at 5 a.m. were resurrected. She was said to be furious at staffers when told she couldn’t keep the free designer duds heaped on her, as any actress could, because it’s against royal rules, said another report.

And The Times reported she wore a pair of diamond chandelier earrings presented to the queen as a wedding gift to Harry and Meghan by Saudi Arabia’s crown prince, Mohammed bin Salman, three weeks after the murder of Jamal Khashoggi, a Washington Post journalist. Months later, U.S. intelligence concluded the crown prince was responsible for ordering the murder, and last week the report on the case was declassified by the Biden administration. The crown prince denies ordering the killing.

If you or someone you know may be struggling with suicidal thoughts, you can call the U.S. National Suicide Prevention Lifeline at 800-273-TALK (8255) any time day or night, or chat online.