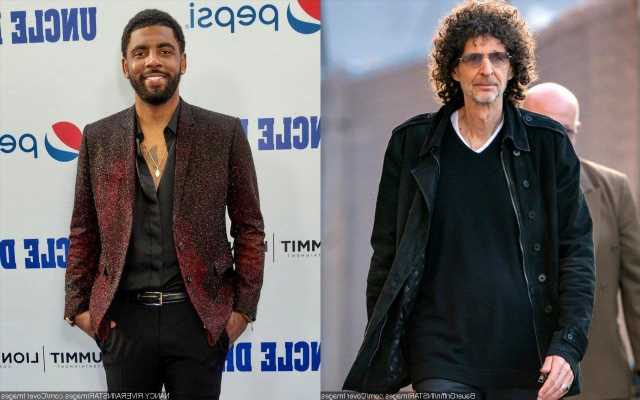 In a new episode of ‘The Howard Stern Show’, the radio host discusses the professional basketball player’s suspension after he made anti-Semitism tweet that angered people.

AceShowbiz –Howard Stern weighed in on Kyrie Irving‘s anti-Semitic controversy. In a new episode of his “The Howard Stern Show”, the radio host talked about the professional basketball player’s suspension after making anti-Semitism tweet that angered people.

Calling the athlete “moron,” Howard said in the Monday, November 7 episode, “This Kyrie Irving is a complete douchebag.” He continued, “I mean what a f**king … you know he’s a flat earther? He’s a douchebag.”

Not stopping there, Howard further mocked Kyrie with more comments. “Just let me hate the Jews. Don’t bust my balls. I just wanna go on Twitter and hate Jews. Can’t you just leave me alone? Everyone hates Jews,” the host said. “Why ya picking on me? I’m just an NBA player. I don’t understand anything. A lot of people hate the Jews. Why ya picking on me? The Earth is flat. I think Jews are lizards. Next question. Just leave me be.”

As for Kyrie, the athlete issued an apology after he shared a link for “Hebrews to Negroes: Wake Up Black America“, a movie that is said to promote anti-Semitism, last week. “To All Jewish families and Communities that are hurt and affected from my post, I am deeply sorry to have caused you pain, and I apologize,” so he wrote in an Instagram post.

He continued, “I initially reacted out of emotion to being unjustly labeled Anti-Semitic, instead of focusing on the healing process of my Jewish Brothers and Sisters that were hurt from the hateful remarks made in the Documentary.”

“I want to clarify any confusion on where I stand fighting against Anti- semticism by apologizing for posting the documentary without context and a factual explanation outlining the specific beliefs in the Documentary I agreed with and disagreed with,” he added.

Concluding his message, he wrote, “I had no intentions to disrespect any Jewish cultural history regarding the Holocaust or perpetuate any hate. I am learning from this unfortunate event and hope we can find understanding between us all. I am no different than any other human being. I am a seeker of truth and knowledge, and I know who I Am.”