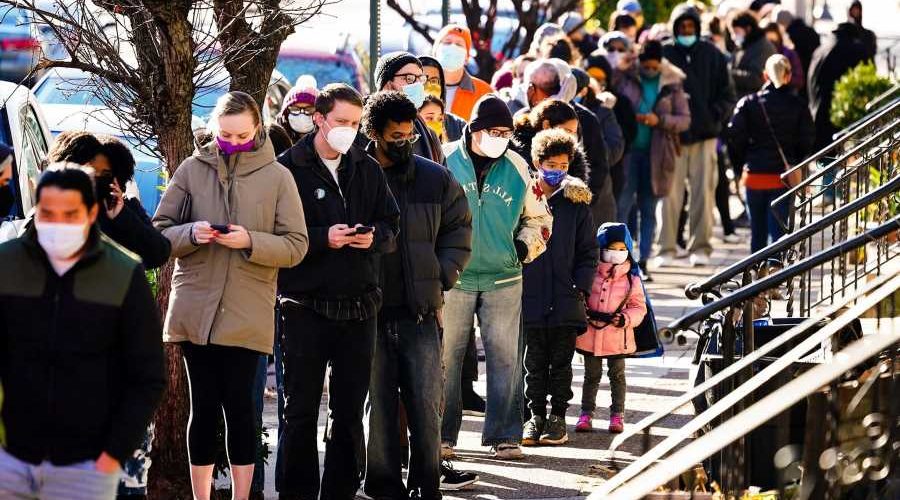 The coronavirus pandemic is entering its third year, and the United States still isn’t doing enough to track the virus.

It’s not just a testing shortfall. The U.S. government is falling short on “genomic surveillance” — that is, sequencing enough tests in the right places at the right times in order to keep tabs on the latest, more transmissible variants. Where they are. Where they might spread next.

The surveillance gap was a crisis a year ago, before the Delta variant erased much of the progress the country had made in driving down cases and relieving the pressure on hospitals. Before the current Omicron lineage bent the curve upward yet again.

Now it’s even worse — and even less forgivable. “We’re doing very badly,” Lawrence Gostin, a Georgetown University global-health expert, tells Rolling Stone. Too few Americans are getting tested. Sequencing labs need more, and more stable, funding. A dearth of samples and cash mean we don’t have a clear picture of a fast-changing pandemic. We don’t know what we’re dealing with today. We don’t know what to expect tomorrow.

According to Gostin, the only reason the U.S. Centers for Disease Control and Prevention has any good data on new variants is that partner health agencies in the United Kingdom, South Africa, and Israel share their own sequencing with the CDC. Sequencing is how you tell one lineage from another, and identify the specific genetic changes that are making the coronavirus scarier over time.

“Surveillance is better than it was at the start of the pandemic,” Gostin concedes. “But we’re still behind our partners. There’s no reason for that because we’re the richest country in the world.” (The CDC didn’t respond to multiple requests for comment.)

Viral surveillance is a complex system. Christopher Mason, a biophysicist at Weill Cornell Medicine in New York, tells Rolling Stone that in the United States, health departments in each state collect swabs from pharmacies, hospitals, and clinics — as well as fecal samples from sewers and septic systems — and hand them off to state laboratories or share them with private and university labs. It is, Mason says, “a patchwork.”

Testers at the labs run the swabs through expensive machines that tear apart any virus in the sample and scrutinize its nucleic acid, giving them a detailed map of its genome. The CDC collates the data from the labs in order to paint a comprehensive picture of the virus’s spread and evolution.

Sequencing is delicate, time-consuming work requiring powerful computers and plenty of expertise. It’s not the kind of thing you can fund piecemeal. But that’s exactly what the U.S. system does. Many of the labs the CDC counts on for sequencing depend on short-term grants that rarely last longer than two years.

It takes a lot of time and manpower just to apply for the grants — and success is never guaranteed. How does Mason’s lab get by? “White knuckles and gritted teeth, and working with everyone and anyone who can help us,” he said.

But a year later, the feds aren’t doing enough to keep labs afloat. “The big thing we need is to have sustained funding for these efforts, over decades, not bursts of months or two-year grants,” Mason says. “That’s the only way the network will be robust against the inexorable march to the emergence of new variants of existing, and emerging, pathogens.”

The news is only slightly better when it comes to testing capacity in the United States — that is, the first step in the CDC’s Covid surveillance system. Compared to overall surveillance, “there seems to be more emphasis on being able to widely test individuals,” says Stephanie James, the head of a Covid testing lab at Regis University in Colorado. But you need both – the close look (testing) and the wide view (surveillance) – to create a clear picture of the pandemic.

Counting government and private providers, there are 20,000 free testing sites in the USA. The Biden administration has spent $3 billion and triggered the Defense Production Act, which gives the government greater control over private manufacturing, in order to help stock pharmacies with test kits.

“But it’s not enough,” Biden said in a speech on Tuesday. “We have to do more.” The president announced the federal government would purchase 500 million rapid tests and set up a website where anyone can request home delivery next month.

Half a billion tests isn’t a lot in a country with 330 million people, Knight points out. “It is a woefully inadequate start,” he says, “and I predict a lot of debates even within each family about who and when to test.”

The free kits might slightly boost America’s dismal test rate. Just four out of every 100,000 Americans get tested every day, according to Eric Topol, director of the Scripps Research Translational Institute in California. For comparison, Denmark — a world leader in Covid surveillance — tests 35 people per 100,000 every day.

But a modest boost in testing isn’t going to solve the overall surveillance problem — and it won’t give us early warning of any dangerous new lineages. New pathogen-detecting technologies currently in development might help, but on top of that we need “a lot of effort and money,” Knight says.

It’s a problem we should have solved a long time ago. Ideally before the pandemic. More realistically, once it was clear — two years ago — just how dangerous the novel coronavirus might be.

But the administration of ex-president Donald Trump dawdled, and the Biden administration — so far — has done only slightly better. “We need to hold him to account,” Gostin said of Biden.

Yes, we’re late. But boosting surveillance now could still save a lot of lives – not only in the current pandemic, but the next one, too. “We keep hoping that Covid is going away, but hope hasn’t been a very effective strategy so far,” Knight says. “It’s never too late to build good testing and surveillance.”

12/23/2021 Celebrities Comments Off on How the U.S. Shit the Bed on Tracking New Strains of Covid-19
Recent Posts