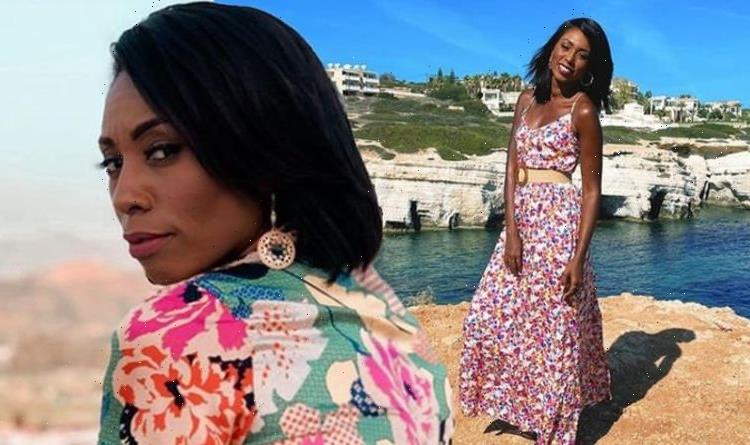 Leah Charles King has revealed what really happens behind the scenes on A Place in the Sun. The presenter’s first episode airs this evening, where she will be helping retired teachers Carrie and Steve find their dream property.

Leah was asked if she has suffered any mishaps since she took on the role.

“Let me think, apart from the usual like, you record loads of footage and you look in the mirror an hour later and you realise your makeup has fallen off your face because of the heat or your eyelashes are hanging off and nobody’s noticed!

“And you’re like, ‘how can nobody notice I have an eyelash hanging off my face’?”

Leah added that what is more likely to go wrong on her shows are the couples not liking the properties she shows them.

She said: “It’s happened a few times on a few shows when they’ve walked in to somewhere and gone ‘I don’t want it no more’ and I know it’s happened on the show before but it seems to happen to me quite a lot sometimes!

“I am not afraid of that and I don’t shy away from that and they like that too.

She continued: “It just makes a really good show and makes really satisfying endings I hope.”

Leah had a singing career prior to her impressive presenting career, spanning 22 years.

She said: “Before TV I was in a girl band for 10 years with my cousins.

“We were in a group called Cliche and we thought it was cool as then of course in the 90s you spelt your name differently.

“We were a good band with good vocals, so we had a couple of songs in the charts.”

The band met much success being signed to the same label as Destiny’s Child and even touring with Lionel Richie.

When the group ended, Leah carried on singing and did backing vocals before she started her TV career.

Leah continued: “In between that I did backing vocals for George Michael, Lighthouse Family and more.

“So, I was earning my keep doing that.”

Leah’s first episode airs later today and she will be helping retired teachers Carrie and Steve find their dream property in the town of Islantilla on Spain’s Costa de la Luz.

With a budget of £110,000 they’re looking for a two-bedroom apartment as close to the beach as possible, where they hope to while away the winters.

Leah has five fantastic properties to show them but will any of them prove to be the perfect place?

You can watch Leah Charles King on A Place in the Sun on Channel 4 at 4pm today.

11/15/2021 Celebrities Comments Off on ‘How did nobody notice?’ A Place In The Sun newcomer on wardrobe ‘mishap’
Recent Posts