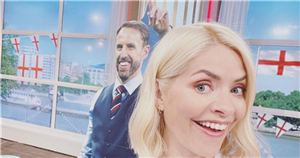 Holly Willoughby has shared a sweet snap of herself in an England football shirt beside football manager Gareth Southgate ahead of the England v Denmark match on Wednesday.

The This Morning host, 40, donned the football shirt on the show as the country prepares for the all-important match against Denmark which could see England going straight to the finals of the Euro 2020 football competition.

Joining her on the show was a cardboard cutout of former footballer Gareth Southgate to support the national team as the players edge closer and closer to the winning cup.

She captioned the post: “Let’s go England!!!! #itscominghome #garethsouthgate,” as she flashed her pearly whites to the camera in a sweet selfie minutes before the match was set to take place.

The doting mum, who recently showed off her long legs in sleek trousers on the show, also took to her Instagram stories to share another shot from the show which saw her proudly wave an England flag with the caption “football’s coming home” underneath.

But it wasn’t just Holly who managed to grab a selfie with the football manager, as Philip Schofield grabbed a quick shot of himself alongside her former midfielder on the show.

The match has the whole of the country eagerly glued to their screens as the team, who have been staying at The Grove hotel in Watford, are within reaching distance of taking home the trophy which hasn’t happened since 1966.

The nail-biting match will be hosted at Wembley stadium on Wednesday with the entire nation backing the team for the most important game of the season so far.

And as the players prepared to kick off, a number of famous faces could be seen in the crowd including Prince William with his eldest son George and his mother Kate.

Within the stands was Prime Minister Boris Johnson and his wife Carrie alongside pop sensation Ed Sheeran all decked out in his sporting gear.

So far, the team have been dominant at Wembley, winning three games without conceding a single goal so far.

The team are expected to be unchanged in defence, meaning United and City quartet Kyle Walker, John Stones, Harry Maguire and Luke Shaw will all start in front of Jordan Pickford, with that back line yet to let a goal through so far in the tournament.

If the boys can bring home another win on home soil, the team will be up against Italy in the final as the attempt to win the Euros and bring it home.