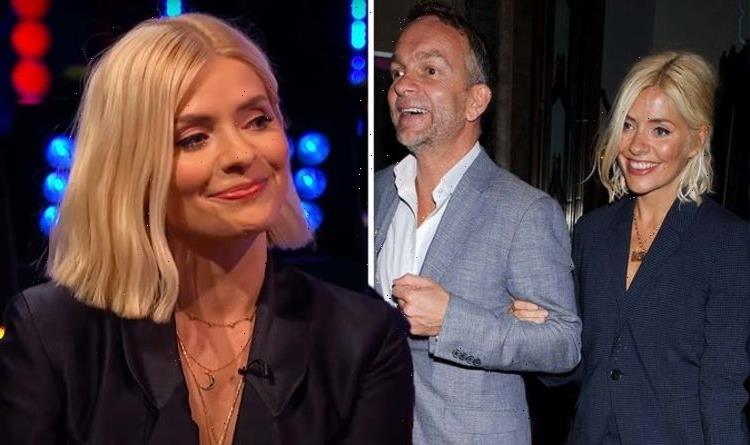 This Morning presenter Holly Willoughby, 40, spoke about making a stomach-churning discovery after getting her new Golden Retriever puppy, Bailey. Holly says she had always been a cat owner but gave in to getting a dog after pestering from her three children, Harry, 12, Belle, 10 and Chester, seven.

Speaking on the Jonathan Ross Show, Holly began by saying Bailey is “the sweetest, sweetest thing” but admitted that she has not had the “pitch-perfect” experience she thought she would.

The presenter explained: “The first day that we brought her home, we were recommended to get a crate and that could be her den and you’d put her in there overnight and that would be her safe haven.

“So we all went to bed and were expecting her to cry overnight, but she was as good as gold.

“Then, I came down the next morning and it was like when you first have a baby I thought, ‘It’s going to be like in the movies and the puppy is going to be there in its beautiful basket and it’s gonna be so perfect.’

“I walked down to this crate and before I saw her, I could smell her.

“I lifted the flap and I swear to god it was like something out of a horror movie.

“She had gone from white and perfect to just stinky and smelly and I thought, ‘Oh my god if I let you out you’re gonna run through the whole house and just cover the whole house in this.'”

Holly then had to scoop up the dog whilst wearing her “white, fluffy dressing gown”.

She said: “I’m covered [and was in the garden showering her down].

“My husband came out covered in it from cleaning the crate. [We thought] What have we done?”

But Holly adds: “She is pretty perfect actually, apart from that first night. I think she did it on purpose. I think she’s quite a clever girl.”

She stunned in a black blazer dress with fringe detailing and a pair of strappy heels.

The presenter, who has co-hosted This Morning since 2009, was promoting her book, Reflections.

In an Instagram post, she told her 7.5 million followers: “This book is quite simply a piece of myself that I wanted to share with you in hope that it resonates with you and starts a conversation with yourself.”

On the show, she also clarified that she is not planning on leaving This Morning any time soon.

She said: “I feel very lucky to be on that show. The show changes so much, I think that’s the beauty of This Morning.

“Recently, it’s had the highest ratings it’s had in 15 years.

“It’s doing really, really well which is extraordinary for a show that’s been around for as long as it has.

“And I think because it changes and it evolves and it adapts.”

12/12/2021 Celebrities Comments Off on Holly Willoughby and husband questioned ‘what have we done?’ after horror discovery
Recent Posts