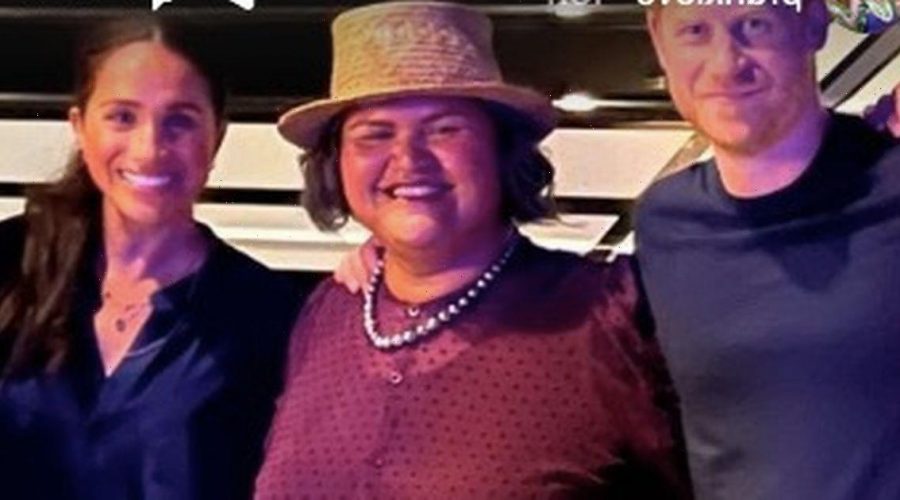 Prince Harry and Meghan Markle were spotted enjoying a concert in California on Thursday night.

The Duke and Duchess of Sussex were pictured smiling as they posed with Hawaiian singer-songwriter Paula Fuga in a photo shared on her Instagram Stories after she caught sight of them at a show.

Singer Paula had shared that she was in town to perform with artist Jack Johnson for his Meet The Moonlight Tour. Harry, 38, and Meghan, 41, were seen attending the concert at Santa Barbara Bowl as they posed for a photo.

The Duke and Duchess were seen in happy spirits in the photo as they complemented each other well with their outfits for their low-key date night.

Meghan looked effortlessly chic wearing a navy blue satin blouse and matching wide leg trousers, as she had her hair tied back in a low ponytail.

In pictures obtained by TMZ, the Duke and Duchess were seen enjoying the show while sipping on drinks, spending quality time together after an emotional past month following the Queen's death.

According to the media outlet, Harry and Meghan watched the concert in a private cordoned-off section that included 10 other people.

Meghan and Harry were seen in a relaxed mood as they smiled and clapped along with the music.

The pair's concert appearance comes after a royal expert shared with OK! the belief that the couple need to decide whether or not they want to reconnect with the Royal Family.

Royal commentator Duncan Larcombe exclusively told us: "Charles, Camilla, William and Kate are entering a new era of the institution. It's up to Harry and Meghan whether they want all or nothing.

"When William and Kate became the Prince and Princess of Wales, one of their first jobs was to reach out to Meghan and Harry, and Charles explicitly affirmed their relationship in his speech, no matter what has been said and done.

"In my opinion, it's only Meghan and Harry who can decide what they want. Do they want to forgive and forget, creating unity with the royal family? Or do they want a wholly separated life in California? They cannot have both."