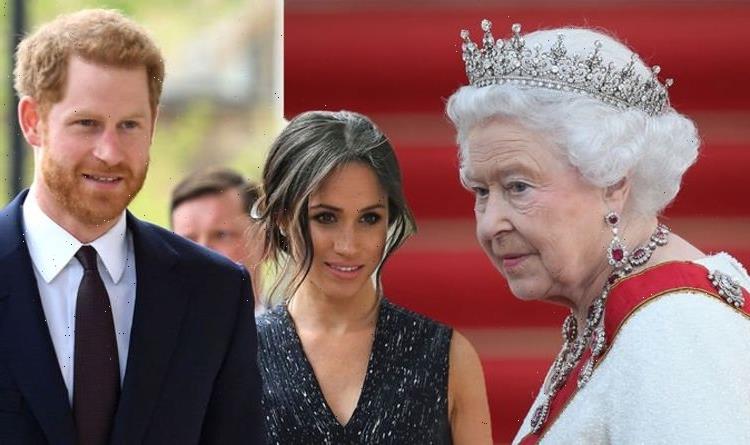 Meghan Markle and Harry: Expert discusses use of private jets

Prince Harry, 37, and Meghan Markle, 40, stepped down as senior members of the Royal Family last year and have since moved to the USA, where they now live permanently with their two children Archie, two, and newborn Lilibet.  Since their departure, the couple has discussed the difficulties they faced while being active working members of the monarchy, particularly during their landmark interview with Oprah Winfrey back in March.

In an interview with Express.co.uk, Dr Tessa Dunlop discussed how their TV appearances had affected public perception of “the firm”.

She claimed: “Harry and Megan kind of undermined our Royal Family, in terms of the messaging.”

However, despite some negative publicity that the couple has brought the Royal Family with their media revelations, the royal author stated that the institution is “bigger” than its individuals and will continue to thrive.

She continued: “The institution is bigger, arguably than individuals, and I think it will endure. But I think there are big questions after the Queen dies.”

Dr Tessa, who is publishing a book on female war veterans, added: “The Queen is a bit like my veterans, you know, there is something that generation that ties us back, especially America and Britain to that good war, we fought.”

The TV host also touched on the possibility of Meghan taking on a political role now she is in the US.

She said: “America has modelled their elective kingship on our Royal Family, so if Meghan Markle goes into politics and you have the royal element, that is a wonderful fusion.

“I can see Americans dying for that, that is so exciting. It is like The Crown come true.”

When it was revealed that the Duchess of Sussex had conducted a virtual ‘introductory’ meeting last October with the high-powered Democratic governor of California, Gavin Newsom, the rumour mill started churning.

The hour-long video call came at an apt time when the governor was searching for a possible replacement for Kamala Harris, the California senator who went on to be elected vice-president.

It was claimed that the Duchess was considering running for the Democratic nomination for President in 2024 if President Biden chose not to seek a second term.

The Mail on Sunday claimed that British sources with links to Washington believe that Meghan is networking with senior Democrats with a view to building a campaign and fundraising teams for a tilt at the US top job.

Far from being surprised or scathing, Californian Democrats were reportedly delighted by the reports last October.

Mike Trujillo, a prominent Democratic strategist told the Times: “I think it’s fantastic. She’s doing everything that’s appropriate and allowed given her new position but she’s definitely putting her toe in the water.

“And once your toe is in the water your whole foot is in and next thing you know you are knee-deep and then you are fully in.”

He believes that their Archewell Foundation could prove to be a launchpad into politics, much like Schwarzenegger’s after-school foundation proved to be his own.

A source close to the Sussexes has latterly said that the meeting with Newsom was “nothing political” and “more social than anything” as it was conducted alongside his wife.

The TV host will release Army Girls for the 80th Anniversary of National Conscription for Women on November, 3.

Army Girls is the intimate story of the final few women who served in World War II and are still alive to tell their tale.

They were female soldiers in a war Britain wanted to fight without conscripting women. It was a vain hope, by December 1941 for the first time in British history women were called up and a generation of girls came of age in khaki, serving king and country.

Speaking on the inspiration behind the book, Dr Tessa shared: “It’s kind of unspoken about, I think certain narratives drown out others in World War II.

“We know that women had a role, that women were at Bletchley Park for instance, but I think what we don’t fully understand is that excluding Russia, we proportionately mobilised more women into our war effort than any other belligerent.

“Not all of them were in the armed forces, but in some form were contributing to the war effort. It was an extraordinary national effort.”