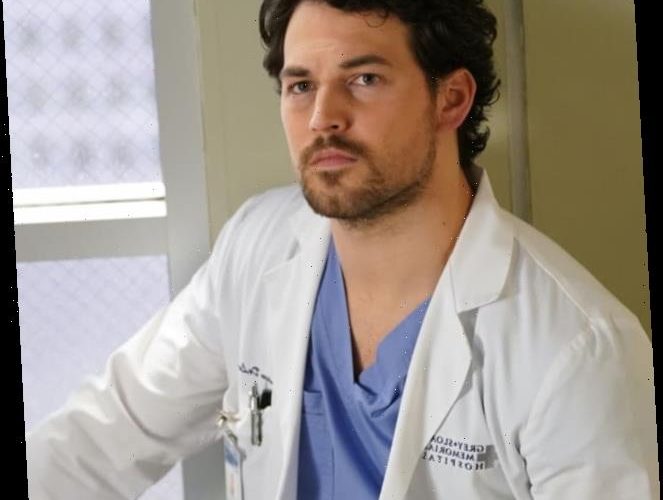 Grey’s Anatomy just did it again, you guys.

The ABC drama returned on Thursday night from a lengthy hiatus — and proved that it still knows how to shock millions of viewers across the globe.

It still knows how to tug heartstrings nearly all the way out of one’s chest…. by killing off a main and beloved character.

When we last left the series, Dr. Andrew DeLuca (Giacomo Gianniotti) had been stabbed in an attempt to pursue and expose a sex trafficker.

On the midseason premiere, we caught up with this doctor on the same beach that Meredith visited during her COVID-19 dream sequence, coming in and out of consciousness.

“I don’t regret it,” DeLuca told Grey — who was still intubated due to complications — on the sand.

“We walk through our lives and we witness atrocities, see homeless people in the street asking for help and we just walk right past them. We see people who can’t pay for medicine for their children.

“We see people beating their kids and say, ‘It’s none of our business.’ We see atrocities on the news every day.

“Crimes and cruelties committed by our government, paid for nonetheless by our tax dollars. And what do we do? We just change the channel.”

“Then we go back to work, and we pretend that what we just saw or that article we just read is somehow normal or acceptable.

At one point, DeLuca woke up from a seemingly successful surgery.

But it was merely a tease because he was then forced into a second surgery.

“I don’t know what happens from here, Meredith,” he said during another dream sequence.

“And yeah, I felt small around you sometimes. I felt insecure. I wanted something from you that I needed to give myself.

During their emotional conversation, DeLuca saw his mom — who was calling out to him in the distance.

From there… DeLuca ran over to his mom and embraced her, the dream sequence ended and we flashed back to Andrew on the operating table.

“I’m a little bit of an exception when it comes to having a happy place, because the hospital has always been mine,” Grey said in a voiceover towards the end of the stunning episode.

“Maybe it’s because of where I grew up.

“But if you’re not like me, you’re going to want somewhere else,” she concluded, as fans watched DeLuca walk off into the sunset with his mom.

Following the installment, Gianniotti expressed his gratitude at his Grey’s Anatomy experience.

“So much I could say… but all that comes to mind is thank you,” he Tweeted.

“Thank you to all the fans who loved Deluca as much as I did. Telling his story was and will be one of the great honors of my life.

Speaking to Variety, showrunner Krista Vernoff said that DeLuca’s death came to her “like a vision” while she was walking along a real beach in the real world.

“I think that he went out fighting for what he believed in. And he was through his mental health crisis. He’d become a very productive member of the hospital staff.”

The producer also teased that while DeLuca is dead… fans aren’t quite done with him.

“He actually does appear in a couple more episodes this season,” she said. “And he’s directing an episode.”

That’s something at least.

Meanwhile, if Grey’s Anatomy really does end in just a couple months, we shudder to think: