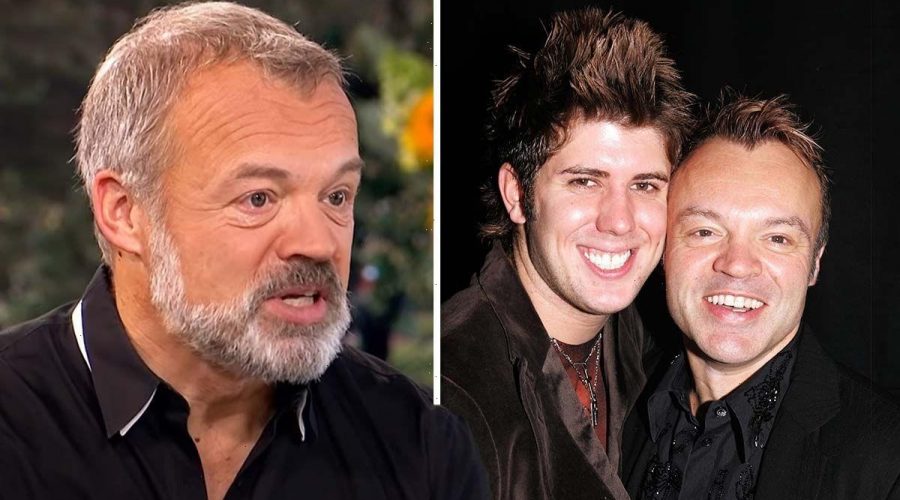 Graham Norton, 59, previously detailed his short-lived romance with Kristian Seeber, 41. Kristian is best known as drag queen, Tina Burner, and starred in last year’s series of RuPaul’s Drag Race US. The pair were in a relationship for several months in 2005, before it ended in “disaster”.

Graham met Kristian at Barracuda, a gay bar in New York, and was infatuated with him from the off.

Writing in his 2014 autobiography, The Life and Loves of a He Devil, Graham described Kristian as “tall and broad-shouldered with an easy smile that took up half his face”.

On what captivated him, Graham gushed that Kristian had a “special spark” that “makes you feel as special as he is”.

Nevertheless, Graham concedes that he was “not great boyfriend material”.

During their time together, Kristian moved into Graham’s London home and the pair were spotted together publicly on numerous occasions.

Remembering their fling which took place in 2005, Graham wrote: “The experiment lasted for about six months, and it was a disaster.

“I realise that even to a perfect stranger, the outcome would have been glaringly obvious. But when you are in the middle of something and you are desperate for it to work, you will try anything.”

Graham recalled: “The madness was over.

“But this time with no shouting or histrionics, just some slow, heavy tears shed over lunch in an empty restaurant.

“I walked home, finding some comfort in the fact that a man in his mid-forties could still feel such heartache.”

During his stint on RuPaul’s Drag Race last year, a fellow drag queen probed him about their “fling”.

Kristian said: “I love how you say fling, I was in a relationship.

“Graham is so famous, he’s at that level where your life is just like put on a platform.

“He’s such a great guy and it never ever got to him. It was the most amazing thing.”

Kristian also said that throughout the duration of their relationship he was subject to “judgement” from others over whether he was “after [Graham’s] money”.

However, Kristian notes that people “want to draw their own opinions”.

It comes as Graham will be offering his usual running commentary on the Eurovision Song Contest this evening.

You can watch it on BBC One from 8pm. It will also be available to stream on BBC iPlayer.