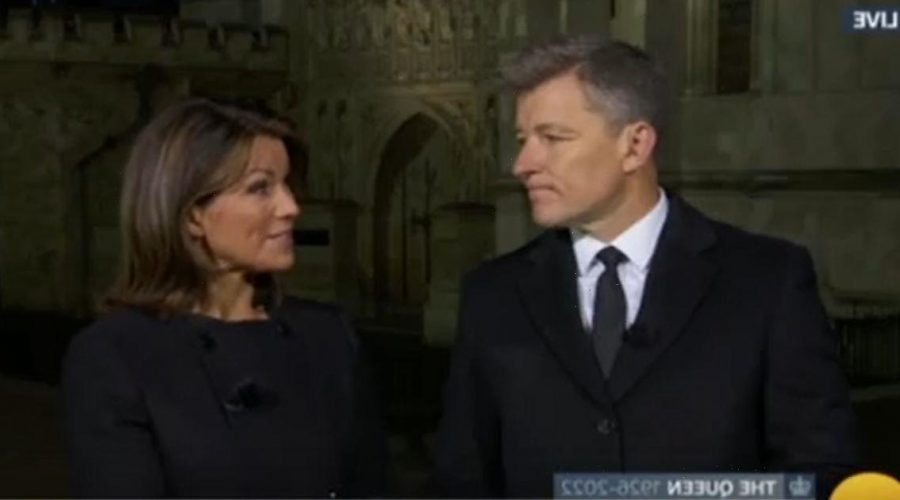 ITV Good Morning Britain was very different this morning as it underwent major changes to ensure coverage of the Queen's state funeral.

Susanna Reid joined by co-host Ben Shephard presented the programme live from outside Westminster Abbey and in a change to the usual times they remained on air until 9.30am.

In tribute to Her Majesty, the Good Morning Britain theme tune was also changed and the string music usually playing during the ad breaks was slowed down for the occasion.

Describing the day ahead, Susanna, 51, said: "It will be a public farewell and a private time of sorrow for her family who have lost a mother, grandmother and great-grandmother."

During the programme, Susanna discussed her experience of queuing to pay her respects to the Queen.

She said: "It is an enormous privilege to have been able to do that, to spend time paying our last respects, but also those hours in the queue as well, coming to an end now.

"You can see the emotion etched on people's faces, I think almost the fact they are the last in the queue," before Ben added: "It's going to resonate further."

In a ceremony befitting her historic 70 year reign on the throne, the Queen’s four day lying-in-state will come to an end, as the doors of Westminster Palace close to the public ahead of her state funeral procession today Monday, September 19.

Around 2,000 guests are expected to attend the Westminster Abbey service to bid her farewell, with tens of thousands of mourners also expected to line the streets of central London as they witness the historic and poignant funeral procession that will see the monarch's final journey.

Following the service in London, the Queen’s coffin will be transported to Windsor, where a private ceremony will take place before she is interred alongside her late husband the Duke of Edinburgh. At 10.35 a bearer party from the Queen’s Company 1st Battalion Grenadier Guards will lift the coffin from the catafalque in Westminster Hall where it has resided for the last four days and carry it in a formal procession to the State Gun Carriage of the Royal Navy, which will be positioned outside the North Door.

Then drawn by 138 Royal Naval ratings, as is the royal tradition, the gun carriage will then begin its journey from New Palace Yard to Westminster Abbey, travelling via Parliament Square, Broad Sanctuary and the Sanctuary.