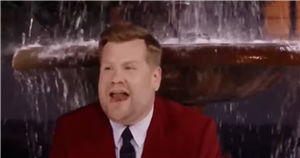 Fans all over the world have been dreaming for a Friends Reunion for years and now, their wishes have finally come true.

However, one aspect of the reunion that loyal viewers were less than impressed with was James Corden hosting the special.

Fans rushed to Twitter to share their disdain over the 42-year-old's present as the episode, which sees him interview the show's six main stars, aired in the UK.

A second wrote: "There was no real need for James Corden or the other celebs. The best bits were when it was the six of them alone. Although Gaga was entertaining…"

A third added: "Has James Corden's agent never spoke to him about the dangers of over-exposure?!?"

While a fourth viewer penned: "Why are Americans obsessed with @JKCorden any other presenter. U could have had any presenter but ya'll choose him."

One even went as far to say James had ruined the classic sitcom entirely, as they wrote: "The One where James Corden ruined #FriendsTheReunion. I don't think I could bear to listen to him. Should have been Paul Rudd, Jeff Goldblum and Reese Witherspoon hosting the show!" Another big moment in the special saw stars Jennifer Aniston and David Schwimmer reveal they had once had a "major crush" on one another.

The pair starred as Rachel and Ross and were lauded for their on-screen chemistry during the show's initial run.

When asked by James if there were any off-set romances, the cast began to look around coyly.

After being prompted, David came clean about his feelings and admitted: "The first season I had a major crush on Jen.

"And I think at some point we both crushing hard on each other, but it was like two ships passing because one of us was always in a relationship."

He continued: “And we never crossed that boundary. We respected that."

Jennifer, who previously gushed over her ex-husband Brad, said she felt the same as she added: "It was reciprocal.

"Honestly I remember saying one time to David, ‘it’s going to be such a bummer if the first time you and I actually kiss is going to be on national television'."