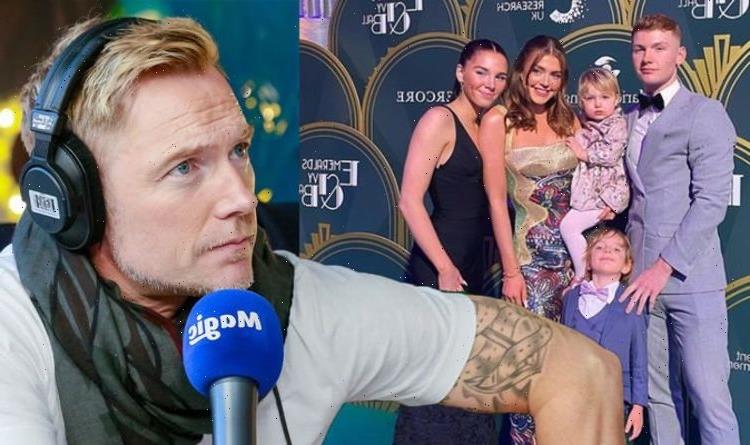 Ronan Keating, 44, revealed to Keith Lemon, 47, on yesterday’s episode of Celebrity Juice that he has had the “snip”, after five children from two marriages. The revelation came when Keith quizzed the Boyzone star on the Christmas special, after he revealed he was “thinking about it” last time he was on the show.

I’ve had the snip!

Within five minutes of the ITV show, Keith quizzed Ronan on the subject.

Keith asked Ronan: “Last time you were on Celebrity Juice, we broke the news that you’d been considering the snip.

“Can you confirm or not confirm that you’ve had it?”

A drumroll played, adding tension to the moment, with Ronan laughing.

The Irish singing legend then announced: “Well… I’ve had it, I’ve had it.

“I’ve had the snip! Freedom! Freedom!”

The George Michael hit Freedom 90 then played, with confirmation of the news jokingly flashing on the screen behind the star.

During the celebration, Ronan was cheering and thrusting his hips while wearing a Christmas onesie as the crowd lapped up the news.

Ronan shares three children from his first marriage to Yvonne Keating, with the pair being married for 17 years and splitting in 2015.

The singer went on to marry his current wife Storm Keating and the couple have two children, son Cooper and daughter Coco.

Their youngest Coco was born back in March 2020, bringing the total of children Ronan has to five.

Storm has previously spoken candidly of her fears she and Ronan would not have children of their own.

Talking to the Irish Independent in 2018, Storm said: “When I first met Ronan, I didn’t really know if parenthood was something we would share together.

“He already had three children – Jack, Missy and Ali – so that, of course, was something to consider.

“I think in terms of the relationship between Ronan and me, there were lots of questions like these, and other things, too, to consider from the start – it wasn’t like a standard relationship in that way.”

Ronan has also discussed fatherhood when he appeared on the daytime chat show, Loose Women.

When discussing more additions to the family, the Boyzone star explained: “No, that’s it. We’ve got five wonderful, healthy children and I’m really, truly blessed but I think that’s it, we’ve got to call it a day.”

Talking to OK! in February last year, Ronan admitted: “I was 22 when I had Jack – a kid myself.

“It was very different because how you raise kids depends a lot on the mother and their preferences too.

“I have an amazing relationship with all my kids, but life is very different for me now.

“These days, when my older kids come over, I’m obsessed with cooking for them. I’m like an Irish mammy!”

Storm also joked in the interview about Ronan getting the snip, as she settled with a boy and a girl.

12/17/2021 Celebrities Comments Off on ‘Freedom!’ Ronan Keating, 44, admits having a vasectomy after having five children
Recent Posts