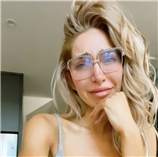 And there’s really no reason for like 95% of them.

Like sure, she’s allowed to say what she wants, it’s a free country or whatever.

But in all honestly, so many of the things that come out of her mouth are absolute garbage and it really feels like the world would be a better place if she could just zip it more often than not, you know?

Most of the time, the things that she says are just dumb, like when she lies about going to Harvard or when she calls herself a “top 10 listed celebrity in the nation.”

But sometimes, she says things that are truly harmful and just plain unacceptable.

Unfortunately, this seems to be one of those times.

We say “seems,” by the way, because we’re talking about a written statement from Farrah, which means that we’re barely able to understand it.

But from what we can tell … well, it’s not good.

“So odd when we see cultural races that have been on surveys, included in business etc for decades yet they say their barely seen and then they limit Muslim women on giving birth,” she wrote.

“Try being #middleeastern #china mental illness should really be spoken about more,” she concluded, adding a gif from the 1997 Disney classic, Hercules.

When you first read it, it doesn’t make a ton of sense, because of course it doesn’t.

However, we’re kind of scholars in the subject of Farrah’s bizarre way of speaking at this point, so we think we’ve got a pretty good grasp of what she’s trying to say.

It seems like the “cultural races” she’s referring to here are Asian people, considering the huge surge of anti-Asian hate crimes recently and the strong effort to raise awareness about that.

So she’s saying (we think) that Asian people have “been on surveys” and “included in business” for a long time, so it’s strange to her that they’re complaining about racism.

This holds up because there are plenty of reports about Uighur women, who are mostly Muslim, being forced on birth control in China — the “China” hashtag” is also a pretty clear indicator of what she’s talking about.

If that’s true, then she thinks that Asian people should realize that being Middle Eastern is more difficult, because apparently racism is a competition to her.

And that last part, horrifically enough, appears to suggest that she thinks Asian people are mentally ill for complaining about racism and hate crimes, and that this “issue” should be talked about more often.

Is there any other way to read her tweet? Because we can’t think of any.

It’s also important to note here that Farrah has a bit of a history of making racist remarks.

Remember the time she said that she’s only attracted to white men, and that “I’m not really into Black guys” because “that’s more of a Kardashian thing”?

Or the time that she was in an argument with Chad “Ochocinco” Johnson’s mother on Marriage Boot Camp and she called her a “f-cking disgusting black piece of sh-t”?

Or hey, if none of that rings a bell, what about the time that she showed up in the comments of one of Blac Chyna’s Instagram posts and wrote “F-ckin monkey ewe sh-t come up 4 what she is a nothing”?

If she’s said all of that, then it’s really not a stretch to think that she could say something so blatantly racist on Twitter.

What do you think about Farrah’s statement?

Farrah Abraham: Being a Celebrity is Just as Hard as Having Cancer!Start Gallery

05/17/2021 Celebrities Comments Off on Farrah Abraham: Is She Being Racist Again?
Recent Posts