A few months after announcing the arrival of her daughter, actress Emmy Rossum shared the first photo of her baby girl alongside a health PSA.

Emmy Rossum shared the first photo of her baby girl alongside a public health message. The actress, 34, debuted the inaugural snapshot of her daughter with husband Sam Esmail on Instagram on Sunday, July 25 and encouraged her followers to get the COVID-19 vaccine, revealing that she received the shot while pregnant.

“When I was pregnant I got vaccinated,” Emmy wrote. “Not only did we have a healthy, beautiful baby girl but we also just learned our daughter now has antibodies. In short, stop being an irresponsible idiot and get the vaccine.” In the snapshot, the new mom gives her baby girl — whose face is obscured — a kiss on her full head of hair.

The actress announced in May that she and her film producer husband, 43, had welcomed their first child together after keeping much of her pregnancy a secret. The Shameless star shared a series of black-and-white maternity shoots on Instagram, one of which featuring her daughter’s little footprint. “5.24.21 On a sunny Monday morning, at 8:13AM, we welcomed our daughter into the world,” she captioned.

Emmy and her husband — best known as the creator, writer, and director of the Rami Malek-led series Mr. Robot — have been married since 2017. The actress was previously married to music executive Justin Siegel, but the two divorced in 2010 after two years of marriage. In an interview with Vogue in 2017, Emmy revealed the grandiose, “Modern Love”-inspired way Sam had proposed. 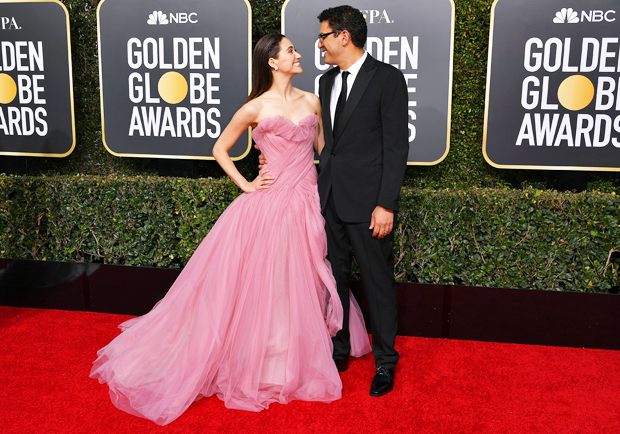 “We have a tradition of reading the ‘Modern Love’ section of The New York Times every Sunday. I do a dramatic reading of it for him,” she recalled. “Even if we’re not in the same place, I read it to him over the phone. Then one weekend we didn’t read it — I don’t remember why exactly — and the following Friday he reminded me that we hadn’t. I was actually in kind of a bad mood that day, so I said, ‘Oh, well I’ll read it eventually.’ And he said, ‘No, no, no, I think you should read it.’”

While in the bath with a glass of wine, she noticed the column sounded a lot like their own story: a director falling in love with an actress. The producer enlisted a friend at the newspaper to create a replica. “At first, I freaked out because I thought perhaps he had actually put it in the paper and I hadn’t seen it, and everyone knew it but me,” she said. “And then, I kind of scanned to the end and it said, ‘Love, your Sam.’ And I realized that he had gone through this whole process of writing this whole story.”