One of Eminem’s adopted children has revealed that they are non-binary and now going by the name Stevie. They shared the news on TikTok with a transformation video.

Whitney Scott Mathers will be going by the name Stevie Laine from here on out. The 19-year-old, who is the adopted child of Eminem, took to TikTok on Aug. 7 to reveal that they are non-binary. Stevie’s TikTok video began with the words, “Watch me become more comfortable with myself.” It then flashed through a series of photos of them as Whitney who went by she/her pronouns. As they got older, their hairstyles began to drastically change. Eventually, Whitney began going by ‘they/she,’ and the video ends with the revelation that Whitney is now ‘Stevie,’ who used they/she pronouns at first, and now uses “all pronouns,” according to the TikTok.

“Forever growing and changing,” Stevie captioned the transformation video. Stevie’s mother is Eminem’s ex, Kim Scott. The rapper was with Kim on and off from 1989 until 2006. They were first married from 1999 until 2001. After the split, Kim conceived Stevie with another man, Eric Hartter, and Stevie was born in 2002. When Eminem and Kim reconciled, he adopted Stevie in 2005. Eminem and Kim briefly remarried at the beginning of 2006, but divorced later that year.

Stevie is one of Eminem’s three children. He and Kim have a daughter, Hailie Jade, 25 who was born in 1995. Eminem also adopted Kim’s twin sister, Dawn’s, daughter, Alaina, 28, in the mid-2000s. He made the decision to do so amidst Dawn’s drug addiction struggles and trouble with the law. Stevie’s father, Eric, also reportedly battled drug addiction, and he died in 2020 at the age of 40. 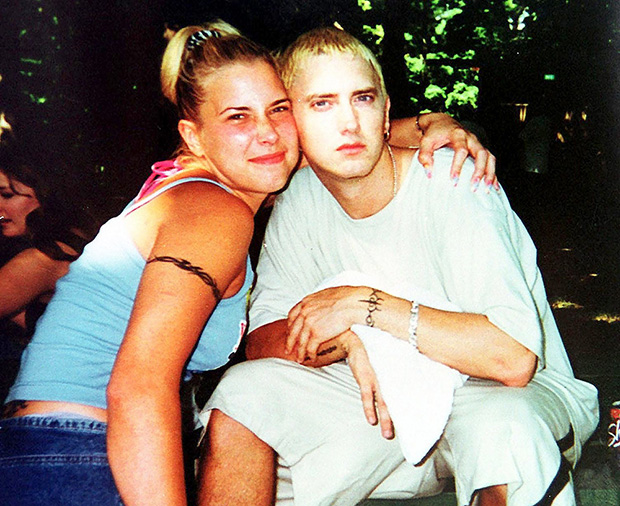 In 2017, Stevie came out as bisexual on Instagram. They also used the hashtags “gender fluid” and “bi” on their latest coming out TikTok post. For the most part, Stevie has stayed out of the spotlight, although Eminem mentioned them, along with Hailie and Alaina, on the 2010 track, “Going Through Changes.” He rapped, “Hailie, this one is for you, Whitney and Alaina, too, I still love your mother, that’ll never change, think about her every day, we could never get it together, hey.”