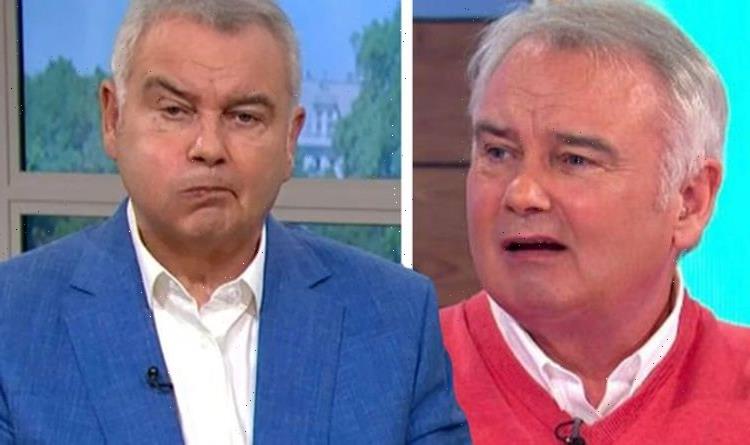 Eamonn Holmes says he misses holding dog after back surgery

Eamonn Holmes, 61, was less than impressed after a Twitter user shared their “unpopular opinion” about toilet cleaners. It comes after he and wife Ruth Langsford, spoke on This Morning about how toilet attendants should be paid a higher wage for doing a job not many people would do.

And it seemed their discussion sparked a reaction from many viewers, who took to social media to thank them for bringing awareness to the situation and honouring current cleaners.

Posting on Twitter, one avid watcher praised the pair, saying: “Sitting on my break watching @EamonnHolmes talking about toilet cleaners & how they should be the highest paid!

“Me & my colleague completely agree & can’t thank you enough for supporting the likes of us who clean toilets daily!”

Eamonn was quick to reply, branding her and her colleagues “heroes”.

“You should be amongst the top earners in the land.”

And while there were others who agreed and supported his views, one had a burning question as to why a higher wage should be paid to do “unskilled” work.

“Unpopular opinion,” they began, “why should they be highly paid?

“It’s unskilled work, you don’t need qualifications to clean a loo or wash a floor?”

But Eamonn was quick to shut down anything on the contrary, insisting the job of a cleaner should come with a bigger pay packet.

“These folk do work few others do and clean up on behalf of people who won’t or can’t do it for themselves.

“They are Hygene Heroes Diane.”(sic)

With no come back to Eamonn’s matter of fact reply, the Twitter user decided to hit back at the host in a petty way, pointing out that he had misspelt the word “hygiene”, something he chose to ignore.

Over the past few months, Eamonn has been regularly updating ITV viewers and his social media followers with his ongoing battle with chronic back pain.

Earlier this year, the presenter was diagnosed with the condition due to a dislocated pelvis which resulted in his back being thrown out of alignment.

Luckily, he has been seeing a physio and doing what he can to try and remedy the issue, but speaking to Ruth on Thursday morning’s show, he revealed the one thing his health woes have stopped him from being able to do.

And that’s hugging his beloved dog.

Turning to his wife, he said: “Do you know what I miss?”

An intrigued Ruth looked back at her spouse as he continued: “Because I can’t bend down at the moment with my back…

“Not being able to hug the dog,” Eamonn added, as he looked deflated.

Feeling sympathetic to her other half, Ruth weighed in while mimicking a pawing motion: “Yeah, she does this to you.”

He concurred: “She looks up to me and…”

As sadness descended onto Eamonn’s face, Ruth said: “I have to lift her up and hand her to you now.”

“Hmmm,” the presenter added, as the two carried on with the show and left the discussion about pets behind them.