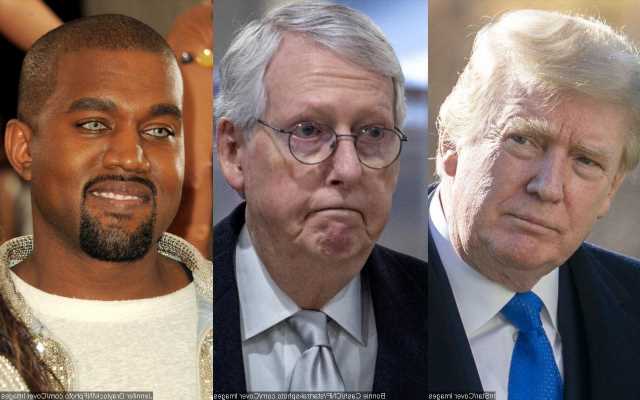 The former POTUS puts the Senate Minority Leader on blast in a new interview after he made brutal comments on Trump’s infamous dinner with the ‘Donda’ artist and white supremacist Nick Fuentes.

AceShowbiz –Donald Trump hurled insults at Mitch McConnell during an interview with Fox News Digital. In the Tuesday, November 29 interview, the former POTUS put the Senate Minority Leader on blast after he made brutal comments on Trump’s infamous dinner with Kanye West and Nick Fuentes.

“Mitch is a loser for our nation and for the Republican Party who would not have been re-elected in Kentucky without my endorsement, which he begged me for because he was going down,” Trump said on Fox News Digital.

Trump’s remarks arrived after McConnell condemned Trump for his dinner with Ye and Fuentes, who is known as a white supremacist. “There is no room in the Republican Party for antisemitism or white supremacy,” McConnell said. “And anyone meeting with people advocating that point of view, in my judgment, are highly unlikely to ever be elected president of the United States.”

Back to the new interview, the MAGA leader also explained his meeting with the “Donda” rapper and Fuentes as he called it a “very quick dinner.” He additionally shared that he didn’t have any idea who Fuentes was and said they “wouldn’t have been accepted” if Fuentes had voiced any white supremacist views during the meeting.

“I had never heard of the man,” Trump elaborated. “I had no idea what his views were, and they weren’t expressed at the table in our very quick dinner, or it wouldn’t have been accepted.”

Trump also shared that he took the meeting after he “heard Kanye had difficulties, including financial difficulties.” Trump’s comments, however, contradicted Ye’s claim that the former President was “really impressed” by Fuentes.

Anti-Trump Milo Yiannopoulos, a far-right provocateur who is now acting as a political adviser to Ye for his 2024 presidential campaign, previously revealed that he was the one who arranged the dinner. “I wanted to show Trump the kind of talent that he’s missing out on by allowing his terrible handlers to dictate who he can and can’t hang out with,” Yiannopoulos told NBC News.

“I also wanted to send a message to Trump that he has systematically repeatedly neglected, ignored, abused the people who love him the most, the people who put him in office, and that kind of behavior comes back to bite you in the end,” he added.

Yiannopoulos went on to say that he orchestrated the dinner “just to make Trump’s life miserable” because news of the dinner would leak and Trump would mishandle it. A source claimed that “Trump was totally blindsided” by Fuentes’ presence. “It was a setup.”