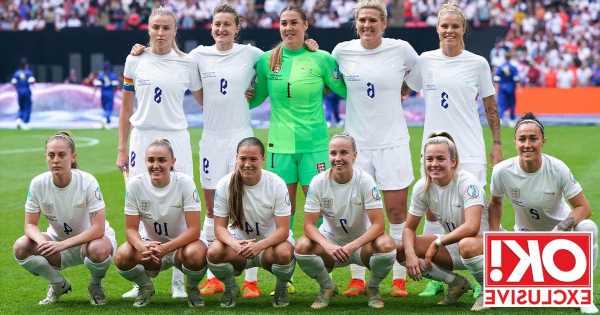 The Women's England squad inspired millions of people from around the world this summer following their historic 2-1 victory.

And amongst those inspired by their triumph were the men's team – specifically England youngster Declan Rice – who hopes to bring home another trophy at the World Cup, which just kicked off in Qatar.

When asked whether he was proud of the Lionesses for stealing victory from the hands of Germany at the July tournament, Declan declares: "Definitely. We spent a lot of time with them in camp in June, so we saw them every day.

The 23-year-old West Ham midfielder noted: "It was a real historic moment and they fully deserved it. They deserve everything they get. "They’re just really top girls and to see them win it at the end was amazing. I think from the quarter finals they just looked too strong and from there I thought they’d win it."

Father-of-one Declan – who welcomed son June with long-term girlfriend Lauren Fryer in August this year – also revealed that his teammates had formed close bonds with their female counterparts during training.

"We got close to quite a few of them," he explained. "Beth Mead is a legend – she’s really talkative and funny. And Ella Toone and the captain Leah Williamson are great.

He laughs, "We ended up just watching Love Island and chilling and talking about football and the Euros – I’ll watch it, but I don’t take an interest in it. "Some people get really into reality TV, but I could never see myself phoning in or voting!"

Discussing his odds at the upcoming Qatar World Cup, Declan revealed he's "looking forward" to playing in front of millions of spectators again.

"It’s going to be my first World Cup, hopefully," he explains. "It’s an honour to be selected. Watching it as a kid, you dream of going to a World Cup – it’s the biggest tournament you can play in."

When asked if England have what it takes to bring it home this year following England's defeat against Germany last summer, Declan confidently agrees: "Yeah, of course we can – 100%. We’ve got a great mix and a great manager who understands the players. "We’ll give it our best go and that’s all we can ask for."

The football favourite also believes his team's heart-breaking loss at the Euros has taught them plenty of things that they'll need in order to bring home the trophy in December.

"Just how together you need to be during a tournament," Declan speaks of lessons learnt. "And how everyone needs to be on the same page.

"As a squad of players going to a World Cup, you might only play for a few minutes or not at all, but you need to be there for the team. To win a tournament you need to have a good team spirit and that’s what we need for the World Cup.

"The Euros was over a year ago now, so we’ve moved on from that and now we’re looking forward to the World Cup and feeling positive about it."

11/21/2022 Celebrities Comments Off on Declan Rice dubs Lioness Euros win ‘a historic moment’: ‘They deserve everything they get’
Recent Posts