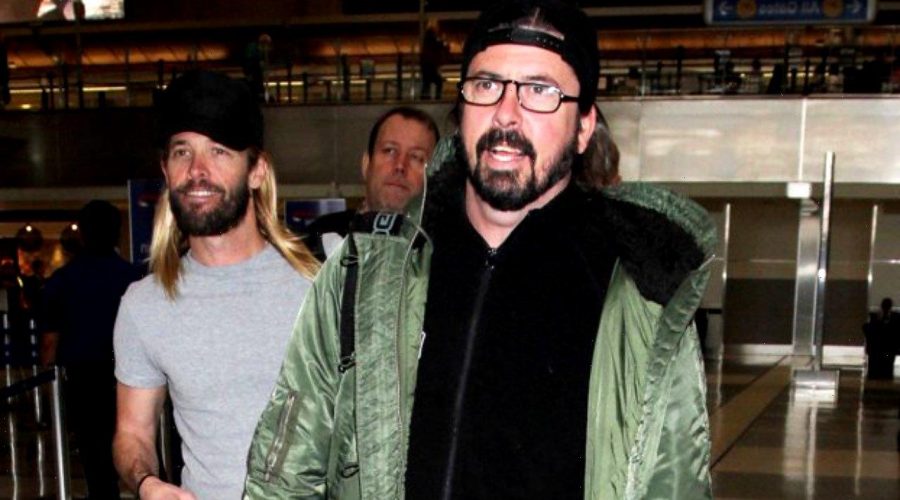 Meanwhile, Motley Crue drummer Tommy Lee shares on Instagram that Taylor’s death ‘hits’ him ‘so f**king hard’ as he spoke to the late musician a few hours before his death.

AceShowbiz –Dave Grohl was overwhelmed with emotion upon his arrival in California following the death of his Foo Fighters bandmate Taylor Hawkins. The musician was spotted sobbing while embracing who seemed to be his manager John Silva at Los Angeles International Airport on Saturday, March 26.

In a picture obtained by HollywoodLife, Dave looked visibly devastated. Also featured in the picture were Dave’s other bandmates, including Pat Smear, Chris Shiflett, Rami Jaffee and Samantha Sidley.

In related news, Tommy Lee took to his Instagram account to pay tribute to the late drummer. In the Saturday post, the rock star revealed that he spoke to Taylor just hours before he was found dead at his hotel room.

“Right now typing words has never been so difficult. Faaaaaak!!!! ..this hits so f**king hard!” Tommy shared. “Dude I just talked with you a few hours ago from your hotel room in Columbia before your concert.”

The Motley Crue drummer went on to say, “I wish this was some s***ty dream or a bad prank that we would both laugh about, But it’s not! You KNOW how I feel about you and how much I love you and we both know there’s no need to type it all out on social media for others to read.” Concluding his note, Tommy wrote, “I love you Taylor. Rest In Beats, Tommy.”

On Friday, March 25, Foo Fighters broke the news of Taylor’s passing via their official Instagram and Twitter account. “The Foo Fighters family is devastated by the tragic and untimely loss of our beloved Taylor Hawkins,” read a statement posted by the band. “His musical spirit and infectious laughter will live on with all of us forever.”

Sending their condolences to Taylor’s family and his loved ones, the band concluded, “Our hearts go out to his wife, children and family, and we ask that their privacy be treated with the utmost respect in this unimaginably difficult time.”

While the cause of his death has yet to be revealed, a rep for Foo Fighters told Rolling Stone the band was preparing to perform in Bogota, Colombia when Taylor passed away. According to Colombian news outlet Semana, the drummer was found dead in his hotel room.

Tributes from fellow musician quickly poured in with Miley Cyrus being one of those who remembered Taylor. During her set at a festival in Brazil, the “Wrecking Ball” singer dedicated her song “Angels Like You” to Taylor as a huge picture of the late musician was displayed on the big screen.

“He was already at the festival and that would have been a time that I would have gotten to see my friend and I didn’t. I would have done anything to hang out with him one more time,” Miley explained while in tears. “I know that I get on stage, and anytime that I get to play with my band – which if anything ever f**king happened to any of them it would f**king kill me, so I couldn’t imagine how the Foo Fighters feel today.”

Taylor joined the Foo Fighters in 1997, after original drummer William Goldsmith left the band. Prior to that, he had played drums for Alanis Morissette. He was inducted into the Rock and Roll Hall of Fame by Paul McCartney with Foo Fighters in 2021.