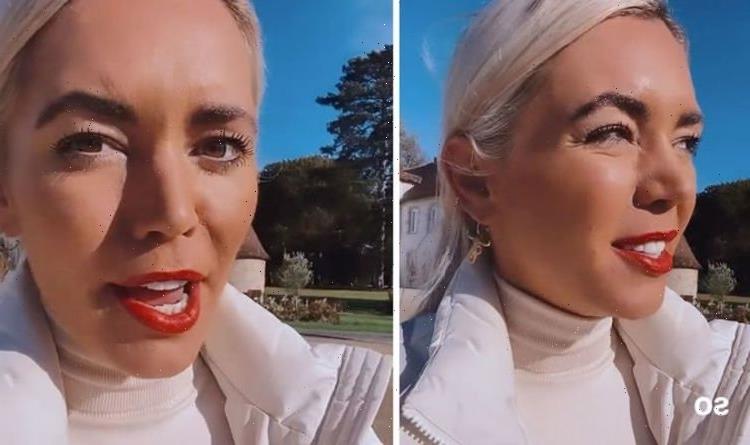 A Place in the Sun host finishes filming early

A Place in the Sun presenter Danni Menzies took to social media last night to share an update with fans after receiving the news that filming would be cut short. The 32-year-old TV star has been shooting scenes for the Channel 4 show in France.

Far from being disappointed with the last minute change of plan, which meant she would no longer be able to drive a rally car after filming, Danni was pleased with the news.

It meant she would be able to fly home early and see her beloved pet dog.

The decision to end early comes after a “very exciting” day on set, she said.

Danni revealed that her house hunters had fallen in love with a property they’d seen and instantly wanted to secure it.

The presenter did not reveal the outcome of their bid to purchase the property, but told her 82.600 Instagram followers that they were “really happy”.

Danni spoke to fans via a video upload on her Story.

She looked glamorous in the footage, in an all white ensemble which she teamed with a slick of red lipstick.

“So we had a bit of a change of plan this afternoon and that means that I don’t get to go rallying at the racetrack which is a bummer,” Danni said to camera, in the sunshine.

She then went on to explain what had happened during filming.

“However, it was very exciting because we walked out of our last house and our house hunters were like, ‘Yeah, this is the one! Let’s buy it right now.”

“So that was exciting.”

Danni spent her last day in France showing viewers around a stunning chateau.

Spinning the camera around to show her location, she continued: “And we’ve just finished filming this beautiful chateau.

“And I’m not too disappointed because they’re really happy and I get to fly home early and see my little Stinky,” she signed off, referring to her pooch.

Earlier in the day, Danni showcased her outfit as she struck a pose in a picturesque location.

In the photo, Danni sported a white roll neck top and matching smart trousers along with a pair of coordinating ankle boots.