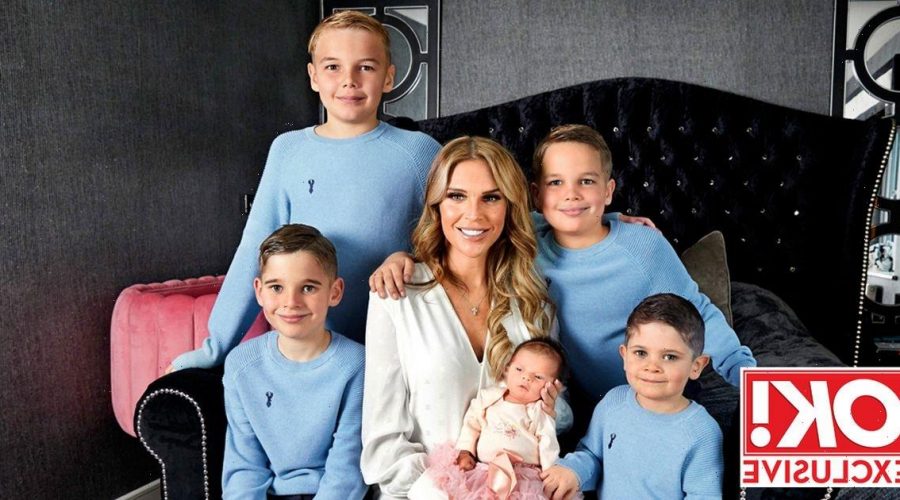 Danielle Lloyd has exclusively introduced her first daughter, Autumn Rose, and detailed the 'intense, quick' labour, which saw the gorgeous little one born during an England footie match.

Baby Autumn arrived after Danielle – who’s already mum to sons Archie, 11, Harry, 10, and George, eight, from her previous marriage and four-year-old Ronnie with hubby Michael O’Neill – was induced at 38 weeks on the 12 November.

And at 8.19pm, as Gareth Southgate's men played Albania in the background, adorable Autumn made her entrance, weighing 6lbs 13oz.

However, while the birth proved to be quick, it wasn't without its drama.

When Danielle's waters were broken by medical professionals, nothing happened. The star was then hooked up to a drip to help things along.

"The drip is a synthetic hormone, which gets the contractions started," Danielle explained. "By five o’clock and it went from zero to 100 really quickly.

"I had a midwife called Emma, who was really lovely, and about 7pm they did a handover and I got a new midwife called Kelly. She came in and by that time I was like, 'These are really intense now.'"

And just hours later, baby Autumn entered the world. "[She] arrived at 8.19pm," Danielle added. "It was literally that quick!"

It wasn't all smooth sailing from there though, as the baby needed tests after suffering some initial breathing problems, something Danielle said was 'scary'.

"She was making funny breathing noises, so it was really scary," Danielle told us. "The doctors were a bit concerned about her breathing, because usually when a baby comes out they come out really slowly and all the mucus gets pushed from the chest.

"Because she came out so quickly, she had a lot of mucus on her chest, so throughout the night they had to do oxygen tests, but she was absolutely fine."

Thankfully, she soon recovered, and Danielle was able to give the tot her first feed soon after.

Read Danielle's full interview – and see all the photos from her gorgeous shoot – here. For all the latest news on Danielle Lloyd and her family, sign up to OK!’s daily newsletter.