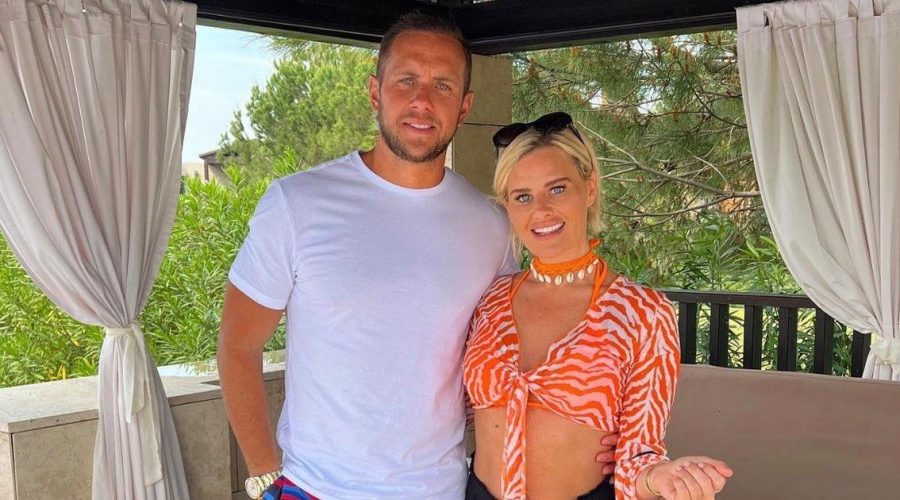 Danielle Armstrong has opened up on the moment she's looking forward to most on her upcoming wedding day to beau Tom Edney.

Former The Only Way Is Essex star Danielle, 34, is set to marry her childhood sweetheart Tom this year.

The couple are making the finishing touches to their romantic nuptials, where they will say "I do" and make their vows to one another.

In the lead up to the big day, OK! caught up with Danielle shortly before she jetted to the Greek Island of Mykonos for her hen do, where she is celebrating her upcoming nuptials with her close friends including Ferne McCann.

Far from having wedding jitters mum-of-one Danielle, who shares her daughter Orla with her hubby-to-be Tom, admitted she's excited for the big day, with one moment being something she is particularly looking forward to.

Here Danielle, who has teamed up with NKD Apparel to create a new range, opens up about her big day, her hopes for her and Tom to expand their family soon and much more…

Hi Danielle! You are very busy with your work, wedding planning and being a mum, how do you juggle it all?

My PA organises my diary – she is actually one of my best friends and also going to be a bridesmaid. She's like, "how are you dealing with this week?" Because every Sunday night I like to plan my week and that's probably one of the biggest things that I do.

Organisation, for me, I have to make sure that I know what I'm doing because obviously you're just a chaotic mess. And before being a mum, I only had to think myself and my timekeeping, I'll be honest, it wasn't the best.

But definitely now I think prioritise things, making sure that you know exactly what's going on. And I actually work quite well under pressure, weirdly I quite enjoy it. No day is the same for sure but, I love it.

We were forced into a situation where we were in this standstill. And it was the best time for me because I was having a baby so it gave me the chance to really spend time being a new mum and adapting to that. So I was actually – not pleased with the situation – but, I felt like I wasn't missing out on anything else going on because everyone was in the same situation. But looking back at that experience, we should always take every day and be lucky if we're busy. So I will never moan about being busy because I know what it's like to not be.

Speaking of your daughter Orla, has she hit any milestones recently?

She's gonna be two this week and I just can't even believe I'm gonna have a toddler! She's changing every single day. At the minute, her favourite word is "look" – everything is "look, look look," we have to look at everything. She's changing in the sense she's definitely being a lot more demanding. With the terrible twos everyone goes, "Oh, you're getting the terrible twos, she's going to be a little bit more clingy, a little bit more needy".

What is your favourite thing about being a mum?

My favourite thing is being able to see this tiny little person have your bits of you in her, bits of your partner in her and just having this love – and someone love you as well. When I see her face when she sees us, let's say, after nursery it melts me.

It is the best thing in the world knowing that they love you so much. Don't get me wrong, I'm sure that you know she drives me mad and I drive her mind at the same time. But, there is this special bond that you can't even explain it until you are a parent yourself. There's a connection, a bond and a love that you can't even really explain, it's just the best thing in the world. It's probably the most important job, I think, you can you can have.

I definitely want more children. I'm not going to be looking forward to pregnancy, that's for sure, and I hated my labour. I get really jealous of anyone goes: "Oh yeah, I love being pregnant" as I'm dreading the pregnancy part. But I love being a mum and, of course, I want Orla to be able to have like siblings.

I think we'll get this year out the way, I don't think I can whack a pregnancy in this year as well. But let's see what happens maybe next year or the year after.

As we've mentioned you're also planning your wedding. Do you feel like everything is prepared?

Touch wood, everything so far has gone to plan. I haven't had any bridezilla moments yet! I say yet because you never know, we have got a couple of months. But, it's all gone smooth.

And I think I'm 34 now and when you've been to so many weddings and been bridesmaid so many times, the good thing about that is you get to experience of what elements you like of that wedding or how you would like your bridesmaids to be… Just different things about all the weddings I've been to.

And it's every girl's dream isn't it? And it's what you've planned when you were little girl. I've had a lot of time to plan. I feel like even before I got engaged I planned in my head how I visualised my wedding and it is definitely going that way.

I don't feel nervous. I think, if anything, I feel more like I just want everyone to have a good time. You know when you host a party, you have that kind of pressure of hoping it meets people's expectations. And that's the only thing that gets me a little bit nervous as I hope we will have a great day. But I'm sure they will, who doesn't love a wedding?

And what are you most looking forward to about the big day?

When did you know Tom was the one for you?

I said it would be weird if I said I knew when I was 11 and I saw him in assembly!

But, do you know what, I've known Tom since we were 11 and we've always had a friendship, always sort of fancied each other – not when you were 11, I fancy you way more when we were in our late teens, early 20s. But, it was after when we went on our first date I remember as soon as he picked me up in the truck for our first lunch together I remember just thinking: "This just feels right."

He moved in with me after two weeks, which people probably think: "That's a bit soon", but we've known each other for years. Then we fell pregnant six weeks into being together. Thankfully he was The One because I was like: "Oh good we're pregnant!"

But, it just felt right, there was no questioning. And I've been in past relationships where you kind of question: "Is this normal? Is he texting back?" You know all the game playing, there was never that with me and Tom. It was just: "This is me, this is who I am, do you like it?" And he was the same. There was just no game plan.

When there's that initial game playing like: "Oh god, I'm gonna leave it and wait until an hour to reply" and all of those things you do.

And trust is a huge thing as well, I trusted him. And my mum always said it, she was like: "When you know, you know" and that was literally how I felt. I felt like that within the first week when we started dating.

Everyone talks about the wedding, but the reason why you're doing it is to be married. What are you most looking forward to about being married?

He said this to me last night. I said to him last night, "Are you excited to get married? What is it about being married you're excited?" And Orla was in between us asleep because she's back in our bed by the way – drives me mad, that's a whole other story!

But, for me, it's just that extra bit of commitment. The biggest commitment you can have is a child, in my opinion – a wedding doesn't necessarily make you more committed. But, having the same name, because Orla has got Tom's surname. I'm quite traditional and I want to keep a little bit tradition and have the same name is Tom and Orla. So I will be Danielle Edney, which is really weird. And what's even more weird is his sister is called Danielle and I always remembered Danielle Edney at school, who was our head girl. So I'm the second Danielle Edney not even the first!

But, maybe it'll make me feel a bit more like a family unit – just being like husband wife, same surname children. And I keep feeling like I'm going to feel more grown up! It sounds ridiculous because I'm a mum but I feel like when you say you're someone's wife, you've reached top adult grown up checklist. Hilarious because I've got businesswoman and a mum but yet I feel more grown up being a wife, that's crazy.

And finally you've teamed up with NKD Apparel on a new range, tell us about it.

After giving birth to Orla I'd actually gained about four and a half stone in my pregnancy. And I think any woman can relate to after having a baby it's so hard finding clothes that you feel comfortable in, but also you want to feel your best as well. And I remember just looking at different like gym wear brands and NKD Apparel just came up, I ordered some bits and then I believe the quality of the clothes. I feel like it sucks you in in all the right places. Everything I put on I was like: "I absolutely love this brand."

Even when I was actually trying to go to the gym – this is probably about three months after having Orla – I started to do one or two workouts even just from home. So at the time we were in lockdown as well so I wanted clothing that you could wear to the gym, wear at home, put a blazer on it and look presentable going shopping. And it's kind of fitted every situation.

I started buying so much from the range and then I spoke to the girls and they asked would I be interested in doing a collaboration with them. And I was so excited because, for me, I've got a really believe in a brand and actually wear it, which I was doing anyway so it was quite natural.

And here we are and I'm so proud of the collection.

For all the latest showbiz stories, sign up for OK! s daily newsletter here.