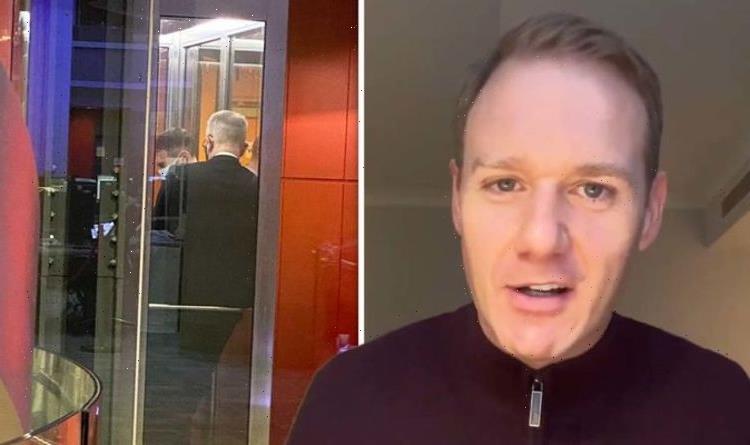 Michael Gove interview delayed as he gets stuck in BBC lift

Michael Gove missed an interview with the BBC this morning after getting stuck in a lift at New Broadcasting House. The Cabinet Minister was due to appear on BBC Radio 4’s Today programme at 8.10am to discuss his plans to tackle the cladding crisis.

The set-back was revealed by presenter Nick Robinson who told listeners: “You might have been hoping to hear from Michael Gove at this time.

“He had very kindly come into the building so we didn’t have to deal with one of those awkward line failures.

“Mr Gove is stuck in the Broadcasting House lift.

It is understood the politician and his security guard were released from the lift after 30 minutes.

The hashtag #FreeMichaelGove started trending on Twitter and attracted the attention of many famous faces.

BBC Breakfast presenter Dan Walker retweeted a photo, which was shared by one of his colleagues, of Mr Gove stuck in the transparent lift and said: “Anyone know what radio station is on in that lift?”

To which BBC journalist Jackie Leonard replied: “It’s the Radio 1Xtra lift. At least we know he likes the tunes.”

LBC host Shelagh Fogarty wrote: “Michael Gove stuck in a lift at #BroadcastingHouse so can’t do an interview about building safety.”

Author Nick Pettigrew quipped: “Michael Gove has discovered the answer to that age-old question, ‘Who would be the worst person to be stuck in a lift with?’

“The answer is himself.”

DON’T MISS
12 celebrities you didn’t realise were British[INSIGHT]
Dick Strawbridge hits back at claims his children are ‘spoilt'[NEWS]
Judy Parfitt, 86, stuns in pics from younger years as an actress[LATEST]

“I’ve waited longer than that to actually get on an available lift in Broadcasting House. One rule for them etc.”

Mr Gove eventually made it into the BBC Radio 4 studio at around 8.30am.

Presenter Nick offered him his “apologies on behalf of the BBC”.

Mr Gove replied: “After more than half an hour in the lift you successfully ‘levelled me up’, so I’m delighted to be here.

“I completely understand, these sorts of things happen. If you and I together gave ammunition for Armando Ianuuchi for the next episode of W1A, then fine.”

When he was informed that #FreeMichaelGove had been coined on social media, Mr Gove added: “I suspect there are probably rather more people who are hoping I’ll be incarcerated for longer, but still.”