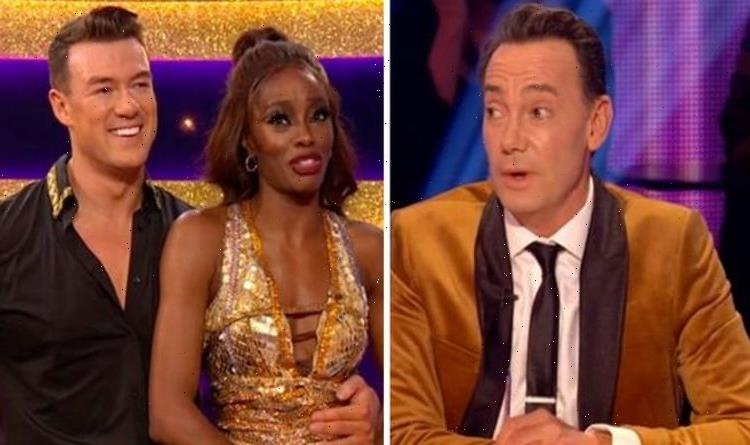 The BBC One show is gearing up for its grand finale on Saturday with Craig Revel Horwood, Anton Du Beke, Motsi Mabuse and Shirley Ballas filling their seats one last time, as the programme wraps its 19th season. But the stars of this year’s line-up won’t be mingling with one another at the bar while celebrating the winner of Strictly Come Dancing 2021, which has become somewhat of an annual tradition on the show.

And while the 56-year-old would have enjoyed getting to know the contestants a little better, in a new interview with Best magazine, the head judge insisted he’ll most likely end up throwing a “little” party of his own.

“Well, because of Covid we don’t have any big knees-up in the bar after the Strictly shows, which is what we’d normally do – and where you really get to know people,” he told the publication.

“So, I’m hoping we can have a little bash in our new home, especially having spent Christmas in a one-bed apartment in Southampton as I’m in panto there!”

He went on to reveal he’s planning on doing plenty of cooking over the Christmas holidays, as he prepares to spend the festive occasion with family and close pals.

“We’ll have one day and night in the New Forest on the 25th with friends, if we can. I’m a keen cook, so I’ll enjoy rustling up NYE party nibbles. I’m a very busy boy, anyway – it’s straight into the Strictly Come Dancing Live tour in January,” Craig stated.

Meanwhile, the lead-up to the Strictly final has been chaotic, with reports claiming comedian and actor Robert Webb will not be returning on Saturday to participate in the reunion dance featuring all of the stars and pro dancers.

The 49-year-old was forced to leave the competition back in October for medical reasons, which could mean that his dancing partner Dianne Buswell will be left to dance with a replacement.

It’s also rumoured that she may team up with Greg Wise, whose partner Karen Hunter suffered a knee injury and has had to pull out of this weekend’s show.

“There’s nothing to suggest the dance won’t happen but it’s going to be a difficult one to arrange,” a source told The Sun.

“Not only do they have so many more people to organise so they’re as Covid-safe as possible, they have two dropouts and one celebrity who’s not exactly flavour of the month with the cast and crew.”

Strictly staff are also reportedly said to be “dreading” the return of EastEnders star ex-contestant Nina Wadia, after she slammed the series and described her time in the ballroom contest with dancing pro Neil Jones as “odd”.

Nina had also complained about the scores she received for her performances, which she considered “shocking”.

Her words after leaving Strictly have left a “very sour taste in the mouth” of staff members at the show, according to the Mirror, whose sources add: “She is coming back for the final, which we are slightly dreading.”

During her chat on The Lads Dads And Couple Beers Podcast, the actress took a dig at Craig as she recalled being scored with half the points he gave to former contestant Judi Love, despite claiming that the latter’s dancing was a “technical disaster”.

“If you have a competition, have a level playing field. Give everybody a chance, or if not that, then at least mark accordingly,” Nina explained.

“You can’t give someone like me a three when I’ve tried so hard and tried something so technically difficult, then at the same time give someone else who’s had a bit of a mistake a seven just because they looked good doing it.”

She continued: “I don’t understand the marking system at all.”

“I don’t think the marking system makes any sense. I thought, ‘OK, this is only week two, you know, you make a little mistake, you’re only human.'”

Despite the reported chaos behind the scenes, producers are going above and beyond to ensure the final goes ahead as planned.

The full Craig Revel Horwood and Anton Du Beke interview can be read in the latest bumper issue of Best magazine, on sale now.