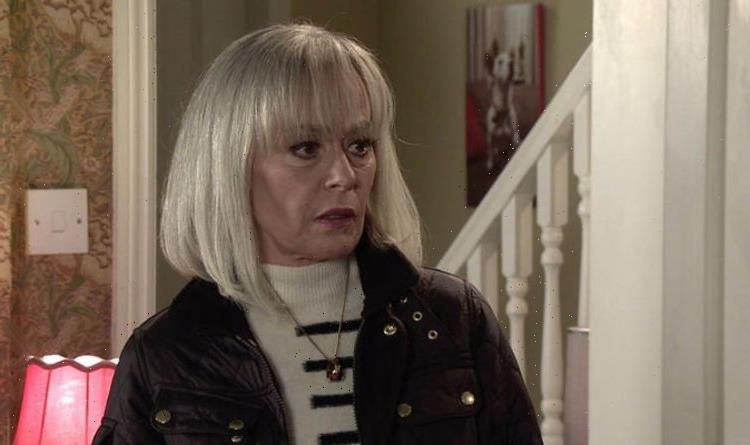 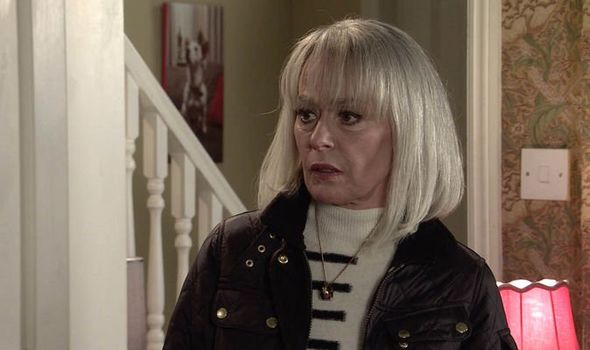 The next day, she put up a brief explanation of her sadness for worried fans: “New Day. Had a huge cry and a good sleep. Too many deaths of friends.” Now, talking to the Daily Express, Tracie has elaborated on why she was so overwhelmed and reveals that, over the past year, she has lost an unbearable number of people to Covid-19. “So many deaths,” she sighs. “I’ve lost 12 friends now. Nobody trains you how to say goodbye to your mates on FaceTime.”

Having worked a great deal on Broadway over the years, the actress has many friends in New York’s theatre community, and the city took a terrible hit from Covid-19 early on in the pandemic.

She adds: “It was my American mates in the main. I’ve got a lot of older ones, too. People would phone me up and say, ‘Trace, we’re here in the hospital with your mate. You have to say goodbye to him. He’s dying’.

“That was so traumatising. I thought, ‘I just can’t deal with this.’ In four weeks, I lost eight friends, one after the other. In one way, technology is brilliant. But in another way, you don’t want to be saying goodbye to your mate and watch them die on FaceTime, do you? That was hard. It still is.”

Ever the professional, Tracie, 59, sets aside her own pain and prepares to talk about her headline-grabbing return to the soap that made her famous. After an absence of 22 years, she has just reappeared in Weatherfield as troublemaker Sharon Bentley.

Ostensibly, she is back to build bridges with long-lost foster mother Rita Fairclough (Barbara Knox). But it soon becomes clear there is a more sinister reason. 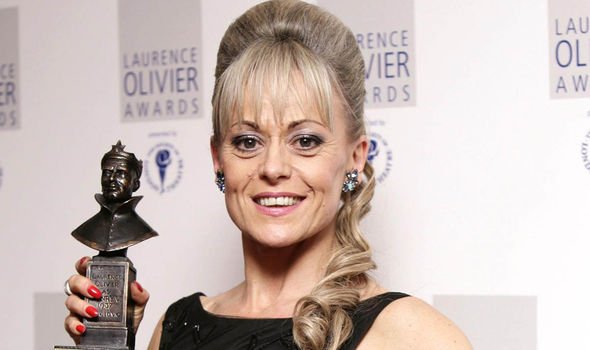 Sharon is helping her drug lord nephew Harvey (Will Mellor) trace the safe house where Leanne (Jane Danson) and Simon (Alex Bain) are hiding so he can terrorise them into not giving evidence against him in court.

It’s a return few would have predicted. Since leaving the cobbles in 1999, Tracie has carved out a stellar career in the theatre.

She won two coveted Olivier Awards for her work in the musicals She Loves Me and Hairspray and earned a Tony Award nomination for her performance as Judy Garland in End Of The Rainbow on Broadway.

Despite such triumphs, Tracie has a grounded attitude towards celebrity: “I’ve never been one to look for it. I’m not doing this because I want fame,” she says.

“My sister, who is a businesswoman and completely non-theatrical, once asked me, ‘Do you not get fed up with people staring at you all the time?'” Most of the time, Tracie says, she doesn’t even notice. The only time it can become a problem is in the wee small hours on a night out.

“It’s always around midnight when everyone is a bit drunk in a club,” she smiles. “That’s when someone will grab me and thrust me over to their family, saying, ‘You have to say hello to my mum’. Of course, you chat to them because they are the people you are doing this for. Who else are you doing it for? I’m not doing it for myself in my bathroom!” 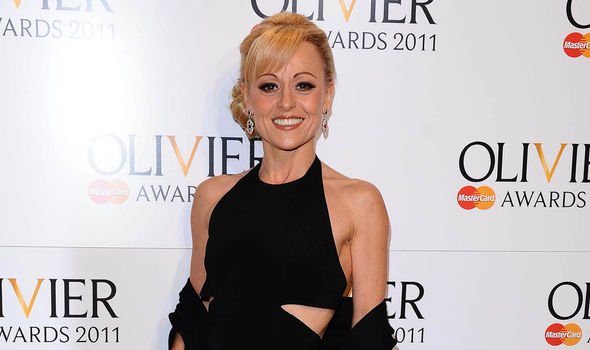 She’s equally modest about all those awards. “It’s very nice when people like your work,” she admits. “But you do think, ‘How do the judges decide between five very different performances?’

“It’s like comparing apples and oranges. You are very grateful when you receive one, but awards cloud certain actors’ minds. I’ve come across some who say, ‘Is this an award-winning part?’ What? You actually think about that?”

All the same, Tracie adds with a mischievous grin: “I’m not saying my awards are not spotlit above my fireplace because they are! I’m very proud of them, but they don’t mean I’m the best. I’m not Meryl Streep – I wish! – but you just have to deal with that and do your best on the day.”

Even so, the ITV soap’s producers were very conscious that it would require something special to tempt her into returning. “People will be expecting Sharon to come back with a bang,” she admits.

Tracie, who first played the role in 1982, adds: “I decided to come back because the storyline was dark. If you play nice people all the time, it’s fine, and I’ve done that.

“But portraying the flaws of a human being, especially if it’s someone under pressure and it’s family related and there is duty involved, is much more interesting.”

The actress, who has never married, says that the character came back to her instantly. It was like meeting an old friend. 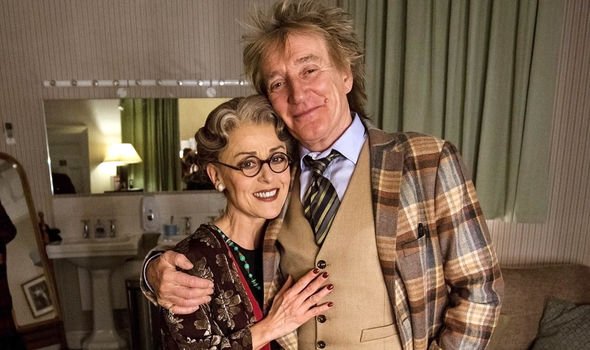 “Sharon was always gobby and impulsive, but she’s got a good heart,” she insists. “She doesn’t mean to be horrible, she just has her own sense of logic. She wheedles her way in. She is manipulating people, but it’s not always obvious. Is she lying or not?

“To begin with, she is helping Harvey because he is family and she is guilt-tripped into it, but she’s not worked out that she might go down for 30 years for this. Then suddenly she realises, ‘Oh my God, this is actually very dangerous for me. What am I going to do about Harvey?’

“Tracie says that the years just melted away as soon as she stepped onto the Coronation Street set again, but it was still a moving moment.

“It was very emotional for me,” she says. “Without Corrie, I probably wouldn’t be where I am today. It was a proper jumpstart for my career. I was fresh out of drama school and really thrown in at the deep end, working straight away with legends like Pat Phoenix and Jean Alexander. But I developed so much as a person.”

Tracie, who was born in Leigh, Greater Manchester, particularly enjoyed strolling down the cobbles of the street itself. “I was delighted to see that number seven is still there. I thought, ‘I built that.’ I looked and saw that under the windowsill, it still says, ‘1982’. I remember Sharon building and painting that with Len Fairclough. It’s amazing to remember all that history.”

But it is her memories of working with an array of wonderful Coronation Street actresses that Tracie recalls most fondly.

“Every Wednesday, all the women would meet in the green room – Pat Phoenix, Jean Alexander, Julie Goodyear, Barbara Knox, Anne Kirkbride and me. We would have a great girly gossip and bond.”

At first, Tracie couldn’t believe that she was invited to spend time with the stars who played the legendary characters Elsie Tanner, Hilda Ogden, Bet Lynch, Rita Fairclough and Deirdre Barlow. “I thought, ‘Why do they want me to join this group? It’s Pat Phoenix and Jean Alexander!’ Coronation Street was always on in the back of the room when I was growing up. I just knew all these people.”

She soon felt right at home, though, and relished their company. “They were all brilliant, strong northern women. Julie would be hilarious, saying, ‘Right, kid, get the champagne out!’ We never talked about work. We all just screamed with laughter.

“Pat would go, ‘Oh, darling, always dress in a feminine way, always look like a superstar.’ I was a tomboy in dungarees and pigtails, and I’d say, ‘give over!’

“But Pat would insist. ‘You can always wear stockings and suspenders under your dungarees, a bit of scent and a twinkle in your eye! Always be a lady.'” For all her success on Coronation Street, Tracie occasionally encountered snobbery about the soap.

“I won’t say who he was because he’s too big a name now, but one actor once told me, ‘Soaps are all right, but it’s not what I think acting is about.’ I thought, ‘Mate, you try doing 22 scenes about suicide and alcoholism in one day!'” 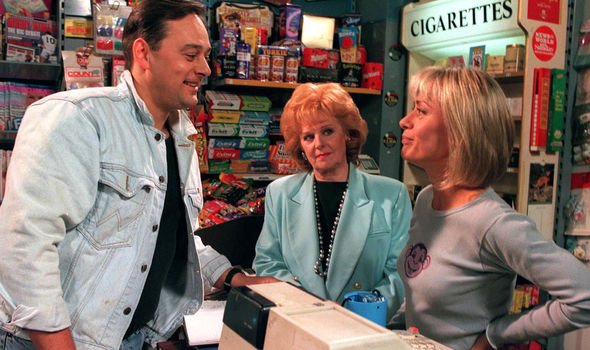 Tracie has adored being back on the cobbles. So will she remain in Weatherfield?

“I know the producers are talking about whether they might want me to stay,” the actress reveals. “But if Sharon does become the most hated person in Britain, they might think, ‘Nobody likes you, Trace, so you’re going!'” Above all, Tracie has loved being back amongst her down-to-earth family in the north west of England.

“I remember one time flying back to Manchester after a run on Broadway. I was tired and carrying lots of bags as I rang my mum’s doorbell – ding, ding. I love my mum. She is lovely, really intelligent and funny, but when she opened our front door, she immediately said, ‘Don’t come in here with your Broadway ways. I’ve a sink full of pots to wash.’

“Then she went straight back into the house.”

Tracie adds: “I know what she was doing. She thought I might have changed in America.

“As if! Your character is set when you are seven years old, isn’t it?

“I just stood there on the doorstep and howled with laughter because I had not even gone inside the house. I said to myself, ‘Yeah, I’m home!'”