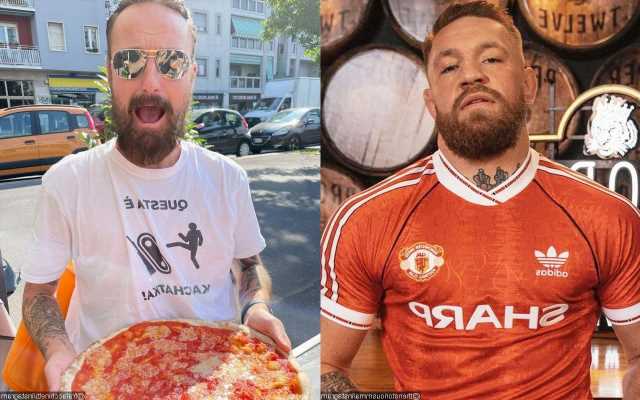 Francesco Facchinetti and his wife say they were ‘having fun’ and hanging out with the former UFC champion before the MMA fighter suddenly threw a punch at him and broke his nose.

AceShowbiz -Another man may have become the victim of Conor McGregor and his violent streak. Italian DJ Francesco Facchinetti claims he has been attacked by the MMA fighter in Rome for an unknown reason, leaving him with a broken nose.

Francesco made use of his social media account to come out with the allegation against Connor. He said he and his wife were hanging out with the former UFC fighter this weekend and were all “having fun” for two hours when Connor invited them to another party. When the DJ accepted the invite, the Irish star allegedly struck the DJ in the nose unprovoked.

“At 2.30 this night I was attacked by Mr. McGregor,” Francesco said in the Instagram video, translated from Italian, posted on Sunday, October 17. “The very famous McGregor, who punched me in the mouth, broke my nose in front of 10 witnesses, his friends and his bodyguards. He attacked me without motivation as we talked for more than two hours and we also had fun together.”

Supporting Francesco’s story, his wife Wilma detailed what went down that night. “Then out of nowhere, he threw a punch in the face of Francesco,” she said. “He was inviting us to another party. Francesco said, ‘Okay, let’s go’ and he hit him.”

“Luckily, he [Francesco] was very close so he [Conor] couldn’t load up on his punch. Francesco flew back, fell on the table, and then on the ground. The first thing that came to mind was ‘are we kidding? Is it a show?’ Then I was paralyzed,” she recounted.

Wilma said it could’ve turned worse, but luckily security guards broke them off. “I turned around and saw that his friends were holding him against the wall because he wanted to continue beating Francesco. Then they took him away. I turned on the light and the guards turned them off,” so she claimed. “Francesco was bleeding. I wanted to help him and the guards chased us away.”

Echoing her husband’s warning about Conor, Wilma told social media users, “He will stay in Italy until October 26th. If you see him stay away from him. Don’t go near him and ask for autographs because he is an unstable and dangerous person.”

Conor has had a quite long record of being involved in attacks. Back in 2018, he was caught smashing a UFC tour bus in New York. Then in 2019, he threw a punch at a man at a pub in Dublin. Just last month, he was involved in an altercation with Machine Gun Kelly on the red carpet of MTV VMAs.