Julie Burchill, a columnist for the Sunday Telegraph, has been fired for a racist tweet she wrote just after Meghan Markle and Prince Harry announced the birth of their second child.

After the Duke and Duchess of Sussex revealed that they’d named their daughter Lilibet “Lili” Diana Mountbatten-Windsor on Sunday, Burchill tweeted out, “What a missed opportunity! They could’ve called it Georgina Floydina!”

Last year, Meghan spoke about George Floyd and other victims of police brutality in a graduation address shortly after the 46-year-old Black man’s death at the hands of a white police officer, Derek Chauvin, who was later found guilty of murder. 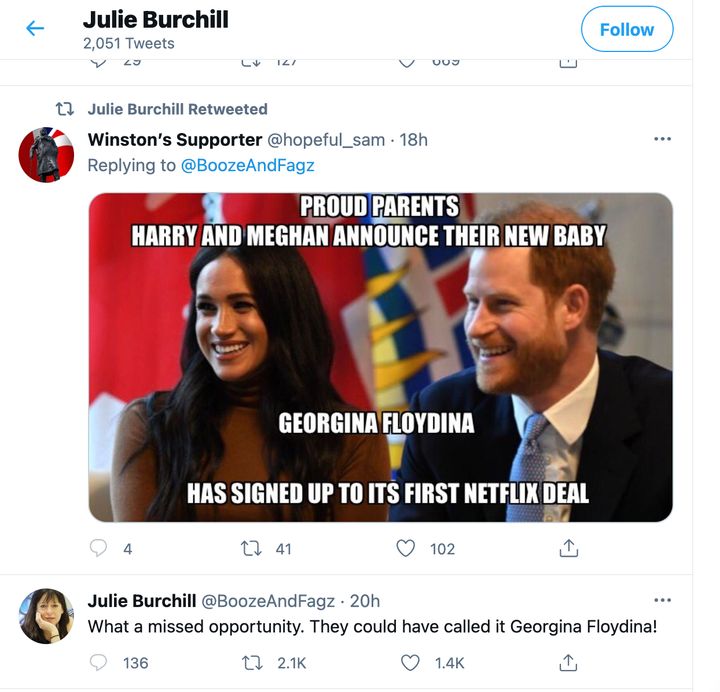 On Tuesday, two days after the initial tweet, Burchill wrote on her Facebook page that she’d “been sacked by the Telegraph.” Journalist Nadine White was the first to report Burchill’s firing.

“It’s been a lovely five years, and I’ll always be grateful to them for ending my Wilderness Years,” Burchill, who goes by Julie Raven on Facebook, said in a post that notably did not contain any apology.

“However, I’d be lying if I said that I hadn’t often moaned to my husband recently about them always rejecting my *edgy* column ideas and giving me more pedestrian ones – which I’ve done splendidly anyway,” she said. “I hope you can see my archive here. Onwards and upwards!”

Omid Scobie, a royal biographer and royal editor at large for Harper’s Bazaar, also confirmed Burchill’s firing with a Telegraph spokesperson on Tuesday. He added that “a source confirms that she was fired following her racist tweets about the Sussexes’ second child (and refusal to apologise for them).”

The Telegraph and The Spectator did not reply to HuffPost’s request for comment on Monday and Tuesday. 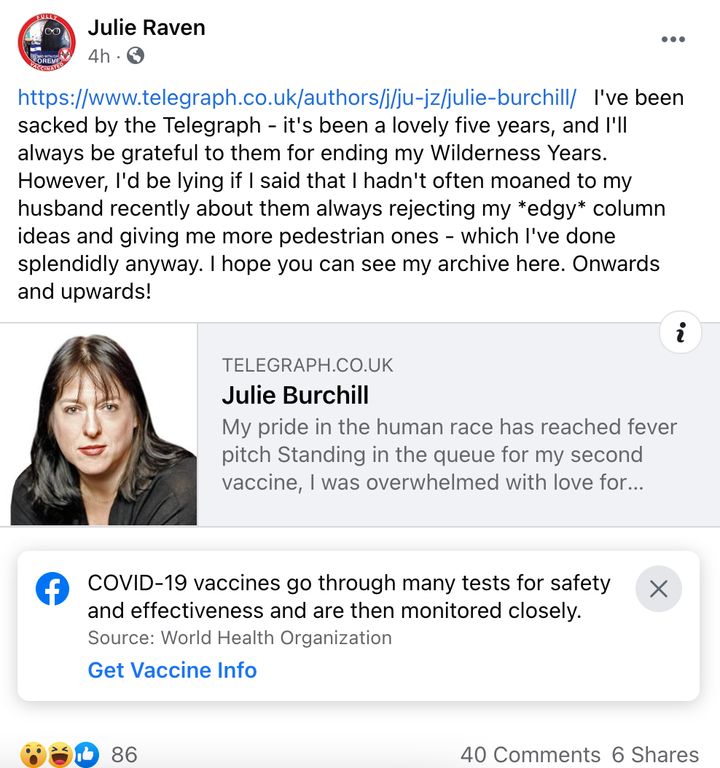 In the comments section of Burchill’s Facebook post, people praised her as a “warrior” and an “inspiration” and questioned why she was fired.

Burchill has been involved in a number of racist and offensive incidents over the years, including encouraging the racist abuse of Ash Sarkar, a journalist and activist, in December 2020.

Burchill accused Sarkar of worshipping a pedophile in a series of ongoing attacks that fed Islamphobic, racist and sexist harassment about Sarkar’s appearance and sex life.

After Sarkar took legal action, Burchill apologized for her defamatory comments and was forced to pay damages, according to BBC. Her book on cancel culture, called “Welcome to the Woke Trials: How #Identity Killed Progressive Politics,” was also canceled as a result, though the columnist eventually found another publisher that picked up the book in March 2021.

Burchill isn’t the only one to face the consequences of a racist tweet about the royal baby over the weekend.

Joanna Toch, a lawyer and former British Olympian, was suspended on Monday from the family law service she founded after engaging with Burchill’s “Georgina Floydina” comment.

Burchill said that she “was hoping for Doria Oprah, the racist rotters,” and Toch replied “Doprah?”

Once the tweets began to go viral, Toch quickly backtracked.

“I am very sorry for the comment and what I saw as a joke,” Toch wrote. “I’ve fought during my professional life against racism which is abhorrent. I’m not a judge and I have children of colour and I apologize unreservedly.”

Toch’s firm, Family Law Cafe Limited, said in a statement on Monday that it had suspended Toch “with immediate effect pending an internal review” and called her comments “offensive” and “unacceptable.”

Meghan has faced continuous racist and misogynistic attacks in the press, on social media and in her personal life ever since she began dating Harry. She revealed to Oprah Winfrey in March that a member of the royal family had expressed racist “concerns” over the color of their son Archie’s skin prior to his birth.

Baker later deleted the tweet and called it “ridiculous, stupid and idiotic.” He was fired from the BBC, and the broadcaster told HuffPost U.K. that the host’s tweet was “a serious error in judgment.”

Baker claimed his tweet “was supposed to be joke about Royals vs circus animals in posh clothes but interpreted as about monkeys & race, so rightly deleted. Royal watching not my forte. Also, guessing it was my turn in the barrel.”