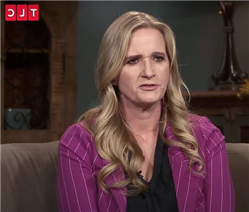 As it turns out, time does not heal all wounds.

When we last saw Christine Brown on Sister Wives, the mother of six was lamenting her romantic plight.

On the Season 15 finale, she voiced her preference for moving back to Utah — and then voiced her displeasure over this proposal getting rejected by Kody, Meri, Janelle and Robyn.

Christine even said at the time that she didn’t wish to continue on with her marriage.

Fast forward to this Sunday’s Season 16 premiere… and very little has changed for Christine.

And she remains intent on changing things up in her life. Big time.

In footage obtained by People Magazine, Kody sits down with all four of his spouses on his Coyote Pass property and delves into the family’s future.

The focus, however, is squarerly on Christine.

“Christine is upset. I understand it,” a teary-eyed Robyn tells the cameras in the season premiere clip.

“It’s scary, it’s been absolutely scary, what our family culture is looking like because we are not spending time together.”

“I don’t know that this is something that fixes itself right away, so don’t be thinking it’s all gone and it’s all put to bed or whatever,” she says to Christine. “I want to honor where you are.”

And where is Christine?

No place positive, that’s for certain.

“I’m not going to make any drastic decisions on what I’m going to do next today — I am hurt today.”

This episode, of course, was filmed many months ago. Over the summer, most likely.

On November 2, Christine went ahead and announced she was leaving Kody after well more than two decades as his spiritual wife.

After Kody wraps the contentious meeting, Christine says in her confessional of Kody:

“I really needed his support, I really did.”

Alas, she did not get it.

As she so rarely has over the past year or so, if not more than that.

“Marriage is hard, but I never wanted the kind of marriage that I have now,” she continues.

“I never wanted to be so estranged and have extremely limited physical contact, not even hand holding.

And then she concludes on an ominous note:

Sister Wives in Disarray: Where is Everyone Living Right Now?Start Gallery

“After more than 25 years together, Kody and I have grown apart and I have made the difficult decision to leave.

“We will continue to be a strong presence in each other’s lives as we parent our beautiful children and support our wonderful family.

“At this time, we ask for your grace and kindness as we navigate through this stage within our family.”

In the days since, Christine has recorded multiple Cameo videos, making it evident in each one that she has no regrets whatsoever.

“Life is so great,” she told one fan, for example. “I had no idea life could be simple.”

He doesn’t sound too broken up over this break up.

“Christine’s decision to leave comes with a great deal of sadness.

“We enjoyed many years together and I have a large amount of respect and admiration for her,” Kody wrote in his own statement two weeks ago.

“Although we are moving forward on different paths, we will always remain committed parents.”

The new season of Sister Wives premieres Sunday, November 21 at 10/9c on TLC.