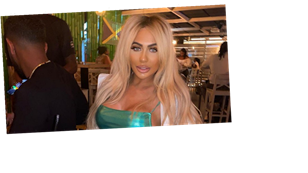 She hasn't had the best of luck with her love life in the past, but that could be all change as Chloe Ferry has alluded to having a new man in her life.

The reality star, who revealed she had a crush on Megan Barton Hanson, took to Instagram to share a picture of herself, but in the background the back of a mystery man's head can be seen as he pays a bill at a restaurant.

Chloe's best friend added to the speculation by commenting: "And payed the bill," while later writing: "He's a good one." [sic]

Sophie Kasaei also joined in and expressed: "Der he is." [sic]

The television personality's fans also questioned who the mystery man was and commented on the snap.

One fan wrote: "Take a picture while he pays the bill. Is that your new man? Love your dress."

"Who's the guy with you Chlo? @chloegshore," another curious follower asked.

A third added: "I just wanna see who da sitting nxt to her," alongside a crying with laughter emoji. [sic]

Chloe is attempting to find love on the new series of Celebs Go Dating: The Mansion which was filmed late last year.

Just before the airing of the dating show, the Newcastle native revealed she was feeling lonely and was ready to meet someone.

She said: "I've been single for a year and I'm ready to find someone. I'm feeling a bit lonely, the show couldn't have come at a better time.

"I feel I didn't get a proper chance last time. The next person I get with is hopefully going to be The One. The person I am with next is going to be the father of my kids."

When asked if that was a lot of pressure on the agents Anna Williamson and Paul C Brunson, the Geordie Shore star, who said she hadn't had sex in a year, responded: "There's no time for messing around, I've had enough partying, I'm bored of it.

"I want a family. I know that's a lot of pressure to put on someone but who cares, it's their job!"