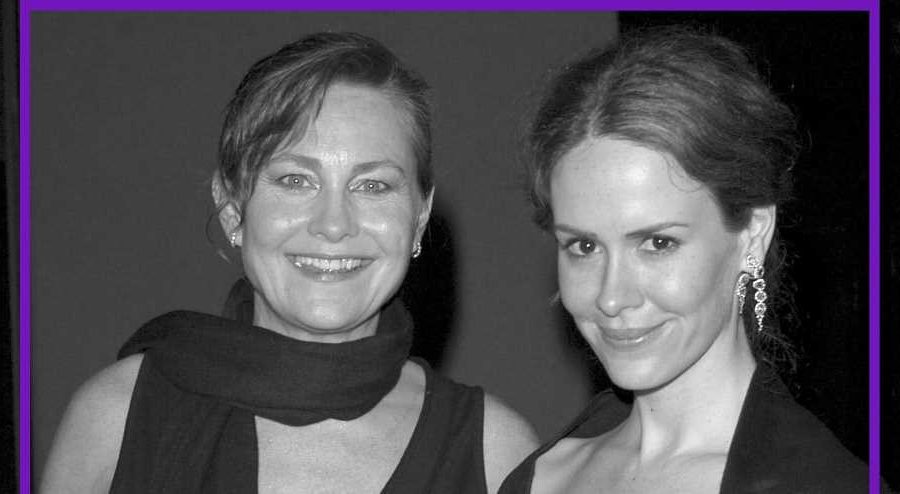 The actors presumably met on the set of their 2005 film Swimmers, which began filming in late 2003. Though the exact timeline is unclear, Jones told Velvetpark that she and Paulson had been "sweethearts" for about four years in Nov. 2007.

Why We Loved Them:

During the aforementioned interview with Velvetpark, Jones couldn't help but brag about her longtime girlfriend. When Paulson was asked about her upcoming projects, Jones chimed in to remind the reporter that her partner was in NBC's ill-fated Studio 60 on the Sunset Strip "and was amazing." Though Swimmers was their only shared project, both actors had hoped to collaborate again.

"We always joke about how we'll go to Canada and work there at dinner theater if we could do something together," Paulson shared, prompting the reporter to turn to the camera and exclaim, "They are really in love here!"

They did eventually collaborate again … sort of. Both actors appeared in New Year's Eve in 2011, after their relationship had ended.

Paulson unintentionally outed both herself and her relationship with Jones at the Tony Awards in 2005. When Jones, nominated for her performance in Doubt, was declared the Best Actress winner, Paulson kissed her on the lips — a moment that was of course caught on camera.

"I was so dizzyingly, insanely, madly in love with her that the consequences of it, if there were to be some, were completely not a part of the fabric of my thoughts," Paulson later said of the kiss in an interview with SheWired. Jones concluded her speech with a covert callout to Paulson, addressing her girlfriend's character in The Glass Menagerie, which was on Broadway at the time.

"Laura Wingfield, I share this with you," Jones said on stage.

Paulson would later describe Jones's coded tribute as "sort of incongruous" given the audacity of the kiss that led up to it.

"I don't think we expected to kiss," Paulson told her sister Rachel, a SheWired contributor. "It was early enough in our relationship that I think we were both a little cautious about it, but then I planted a big kiss on her and that kind of all went out the window," she said. "My heart kind of leapt out of my body because she won this award."

When Jones took home the 2009 Emmy for Best Supporting Actress in a Drama Series, it stood as a major contrast to her 2005 Tonys moment. Not only was Paulson absent at the ceremony, but Jones made no mention (covert or otherwise) of her significant other in the acceptance speech.

A few weeks later, Jones confirmed the public's suspicions: she and Paulson were over.

"We're not together anymore, but we're still dearest of friends," the actress told Us Weekly. "It's the happiest breakup that's ever been. We grew so much together and now we can send each other off with a kiss and great love." "I love being on my own for the first time in my adult life," she went on. "I highly recommend it. I may never be in another relationship as long as I live."

A month later, Jones provided more context on the breakup in an interview with The Advocate.

"We joke that we've been trying to separate since the moment we met," Jones shared. "We're just so different. Obviously the age difference, but if we were more alike, I think the age difference wouldn't have mattered."

Paulson, who's currently dating actress Holland Taylor (32 years her senior), told C Magazine that she's always gravitated toward older partners. "I've never met anyone my own age that [made me feel], 'You are the one,' or 'I want to explore this,'" she said. "That just hasn't happened to me."

During Paulson's interview with SheWired in 2010, she clarified that she and Jones still talk, coyly calling it an "ongoing situation." Years after her and Jones's split, Paulson reflected on the Tonys kiss seen around the world in an interview with Dallas Voice.

TBT: Elliott Gould Said Being Married to Barbra Streisand Was Like a "Bath of Lava"

"The thing with Cherry was very accidental," she said. "And, again, I was very young. If it happened to me today, I don't know what I would do necessarily."

As a byproduct of the relationship's accidental publicity, Paulson was hurt by some of her ex's comments on the breakup. And, in turn, she vowed to be mindful of how she conducts her relationships in the public eye.

"I think it was hard a bit because when she and I broke up there were some public statements said by her in, I think, an accidental way that ended up being hurtful to me, so I've been very kind of careful now about what I'm willing to talk about in terms of specifics." Where They Are Now:

Jones wed director Sophie Huber in 2015. Next up for the celebrated actress is Tammy Faye Baker biopic The Eyes of Tammy Faye.

Paulson met Holland while she was still dating Jones, and recalled thinking she was "probably the most exquisitely beautiful woman I'd ever seen." They began dating about a decade later, in 2015.