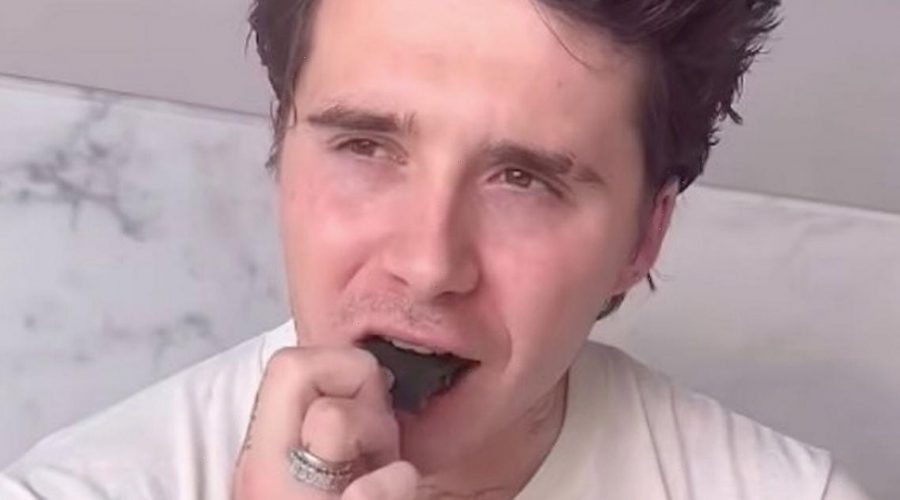 Brooklyn Beckham was left with tears flowing down his face as he took part in a "very dangerous" challenge.

The 23 year old, who recently looked like ever the doting husband as he planted a kiss on Nicola Peltz's cheek at a red carpet appearance, took to his Instagram feed to share a clip of himself taking on the "one dip challenge".

It involved eating a one of Paqui's tortilla chips, which are covered in extremely hot seasons, and waiting for as long as possible before eating or drinking anything else to drown out the heat.

As Nelly's Hot In Herre played in the background of the video, the amateur chef could be seen sitting down in a white T-shirt with a pair of blue jeans as he bit into the black tortilla chip.

The scene then cut to his eyes looking red as tears streamed down his cheeks. Looking into the distance, a defeated Brooklyn grasped a glass of what appeared to be milk and took a few gulps before sniffling and nodding his head.

Laughing, he then reached for a slice of plain white bread, tearing a piece off before eating it and taking another swig of the milk. The clip ended with him wiping his nose with a tissue and finishing the milk.

He captioned it: "Did it x", as fans flocked to the comments section to share their thoughts.

One person wrote: "Barely a reaction! I’d be hollering [clapping hands emojis] very impressive and the whole chip too! Can’t help the tears".

"How was that stomach ache after tho," another joked as a third commented: "Not even once did you loose your cool." with two clapping hands emojis.

While a fourth added: "I got tears in my eyes just watching it".

And a fifth shared: "They're called paquis one chip challenge they are extremely hot with the hottest peppers ever. Very dangerous'."

It comes as the Brooklyn and his wife Nicola, 27, recently shared an update on their home life as they welcomed a new addition into their family.

As Brooklyn racked up the likes, Nicola explained that the couple adopted the adorable pooch and she thanked her late grandmother Gina for sending the pet to her.

She said: “We adopted our baby today and named her Lamb.

“She is the sweetest angel! Today is such a hard for me because it’s Gina’s birthday and I can’t hug her but I feel like she sent me Lamb. I’m so grateful for this love. Please adopt or foster if you can the love it brings to your family is like nothing else”.