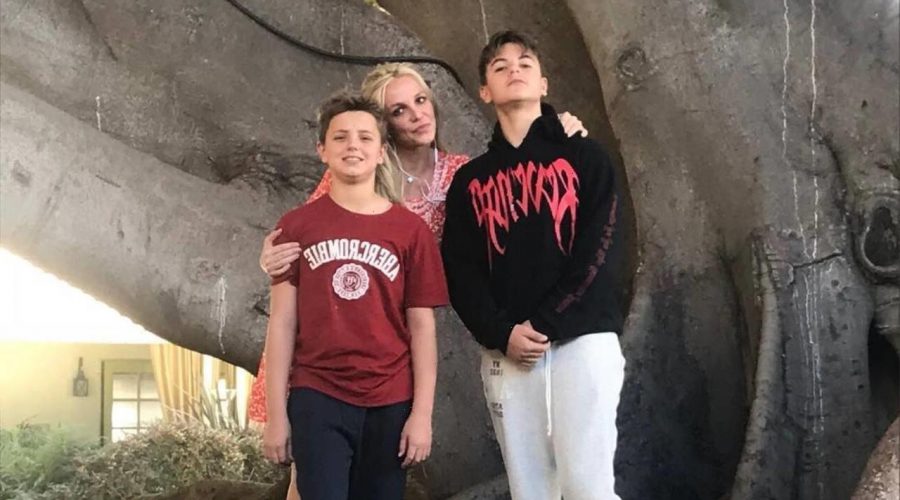 The ‘Circus’ singer is unable to post about her children on social media because it will make them upset, but she will continue with her racy shots despite their complaints.

AceShowbiz –Britney Spears claims her two sons are upset when she posts about them on Instagram. A mother to Sean, 16, and Jayden, 15, with her ex-husband Kevin Federline, the 40-year-old pop star – who recently collaborated with Sir Elton John on new single “Hold Me Closer” – joked that her children could give the music legend a “run for his money” but that they “stopped seeing her.”

“GEEEZ see it hits me later … the fact that I’m doing a song with Elton .. makes me wanna freaking cry … he’s me and my mother’s favorite musician … I listened to driving hours to dance class from 8 to 14 … see again WHHATT THHE F***!!! Wow wow, what an honor to be with such gifted hands !!! WE ALREADY KNOW !!!” she wrote on Instagram alongside a montage of herself dancing in various states of undress. “My son might give him a run for his money !!! ….I have soooooooo much footage of him playing … yep my children are freaking geniuses !!! It’s kinda scary … he stopped seeing me.”

The “…Baby One More Time” hitmaker – who regained control of her fortune and various aspects of her life in 2021 after a conservatorship governed by her family was terminated and has since become known for sharing nude photos online – filed for divorce from her husband back in 2006 and he was granted full custody of their children and her comments come just hours after her youngest son claimed that her raunchy social media activity “may never stop.”

Meanwhile, Britney – who tied the knot with actor Sam Asghari, 28, back in June – failed to invite her close family to her wedding and her sons were said to have declined an invitation, with the pop star concluding her post by noting it was “scary” that her children had chosen not to see her but refused to apologise for her Instagram posts.

She added, “It’s kinda scary … he stopped seeing me … I posted something of him, but he got really mad so unfortunately, I haven’t been able to post my loving family… either way I’m so sorry children I continue to do social media … I’m sorry you feel I do it for attention … I’m sorry for the way you feel … but guess what ???? I’ve got news for you … I’m a child of God as well we all are in God’s eyes … so NOPE I’m not sorry … I’ve learned to say SO !!!”(sic)