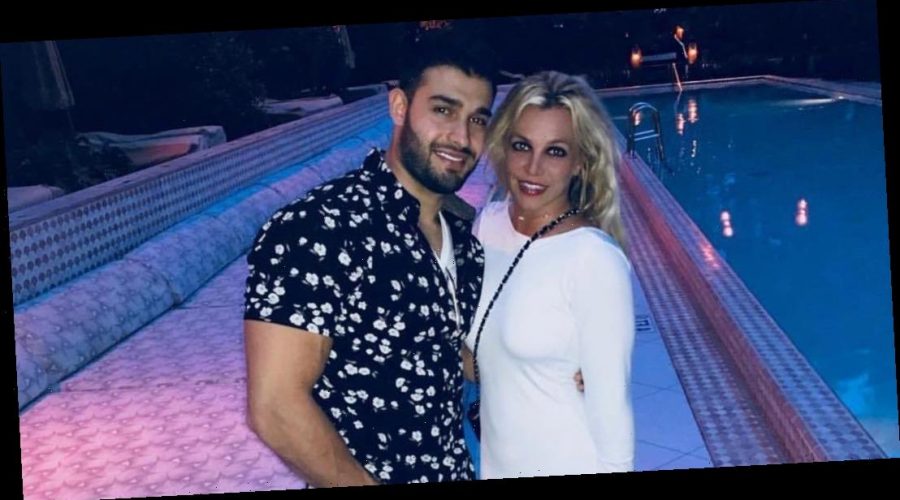 Stronger together! It was love at first sight when Britney Spears and Sam Asghari met in October 2016 on the set of her “Slumber Party” music video.

“I was excited that I [would] get to meet one of the biggest artists of all time,” the personal trainer recalled to Men’s Health in July 2018. “I had butterflies.”

But when Asghari tried to break the ice, he almost ruined his chances with the Grammy winner. “She said, ‘Hi, I’m Britney,’ and I said, ‘I’m sorry, what’s your name again?’” he told the magazine. “I tried to be funny. I don’t think anybody got it.”

Fortunately, Spears was charmed by the fitness model and they started chatting about one of their favorite foods, sushi. They continued to talk throughout the shoot and exchanged phone numbers by the end so that they could set up a proper first date. And the rest, as they say, was history.

“I found his number in my bag. I was like, ‘He is really cute. This guy is really cute,’” the Princess of Pop recounted during a January 2017 radio interview. “So then I called him, and ever since then, he is just a really fun, funny person.”

Since then, Asghari has been a huge support system for Spears in her personal and professional lives. He was a fixture in the audience during her Piece of Me residency in Las Vegas and helped her come out stronger than yesterday (pun intended) after she spent 30 days in a mental health facility in spring 2019.

“Sam has been an absolute dream come true for Britney,” a source told Us Weekly exclusively in May 2019. “He is such a positive light in her life.”

The “Toxic” singer was previously married to her childhood pal Jason Alexander for 55 hours in 2004, and backup dancer Kevin Federline from 2004 to 2007. She coparents sons Preston and Jayden with K-Fed.

Scroll down to see a comprehensive timeline of Spears and Asghari’s relationship!