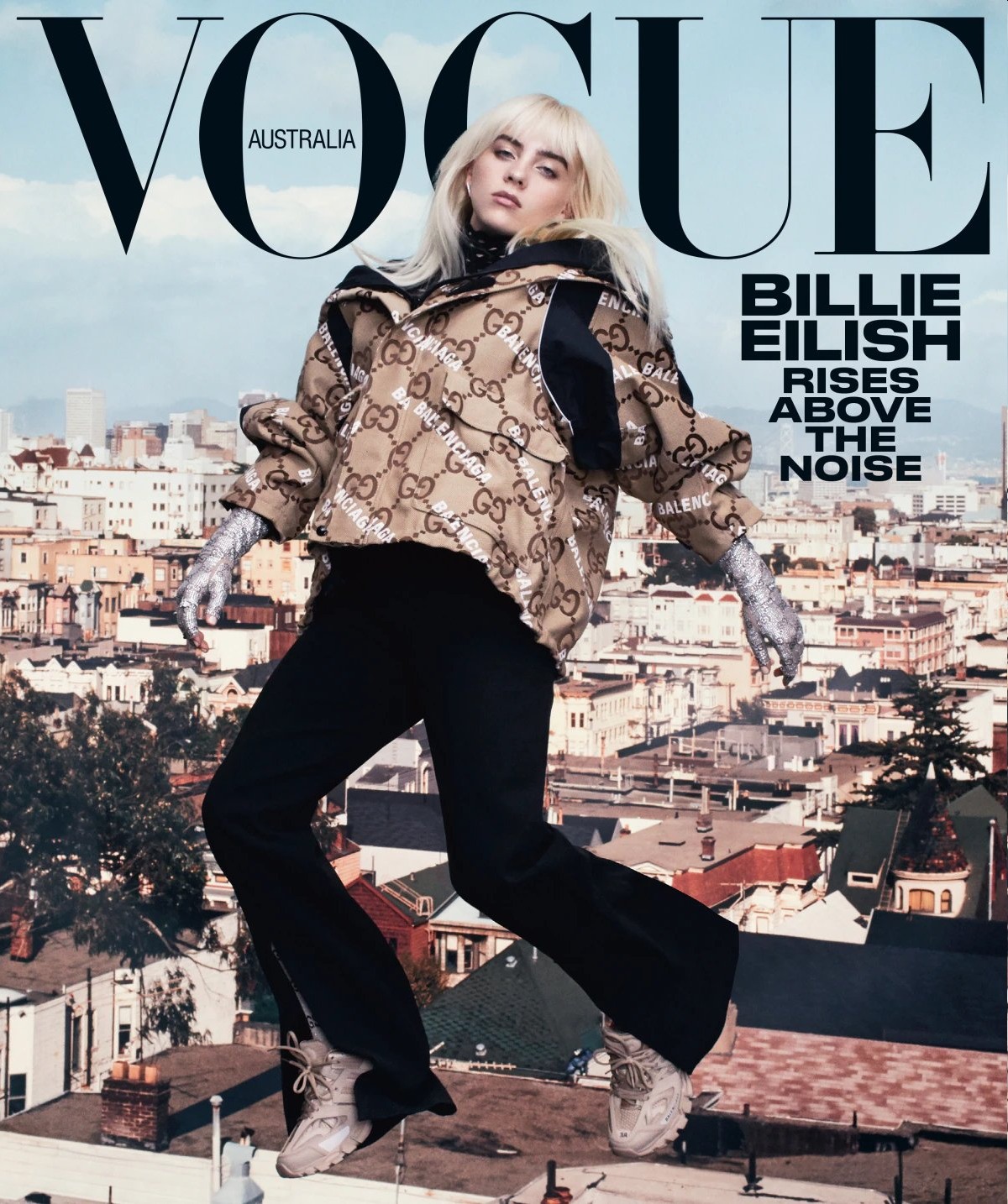 They say youth is wasted on the young. It becomes more and more true. Billie Eilish is, in my opinion, an equal blend of “bratty teenager” and “old soul.” There are moments when she’s wiser than her years and other moments when I want to tell her to grow the f–k up. It’s an interesting blend and yes, she’s very watchable. Billie covers the latest issue of Vogue Australia to promote her current album, Happier Than Ever. This second-album era is all about blonde hair, bangs (I’m screaming) and not-baggy clothes. She’s still wearing layers and she still covers up sometimes, but she’s past the oversized-clothing and green hair phase. Billie chatted with Vogue Australia about feeling angsty over social media and understanding that everyone is embarrassed by who they were at 15. Some highlights:

On her old interviews: “I said so many things then that I totally don’t agree with now, or think the opposite thing. The weirdest thing is how nothing ever goes away once it’s on the internet. Every interview I did when I was 15 is still out there, and I think about it constantly. When you’re a f–king teenager, you don’t really know yourself, so you’re trying to figure yourself out. That was the hardest thing for me: I didn’t actually know how I really felt. So I just came up with this facade that I stuck to.”

Learning how to take time away from her phone: “You can’t really just not go on your phone for a week because you’re having fun and you want to be in the moment, because if you do the internet is like: ‘Where did she go? She’s on hiatus.’ I’m like: ‘Dang, I’m just trying to have fun.’”

Everyone is ashamed of their past: “The internet brings up things from everybody’s past and I’m like: ‘Don’t you guys understand that everybody is incredibly embarrassed and ashamed about their past? Like, do you not think about the fact that maybe you’re embarrassed of your past, so maybe everybody else is embarrassed, too?’”

On Britney Spears: “It’s really, really horrible what a lot of young women have gone through—I mean, to this day. I didn’t have a team that wanted to f–k me over—which is really kind of rare, which [itself] is pretty f–ked up. All I have to be is just grateful that I happened to have a good group of people around me that … didn’t want to just take advantage of me and do what people have done in the past.”

Getting advice from pop stars like Justin Bieber & Katy Perry: “I feel like when something like that happens, your body kind of goes into shock and you can’t really actually look at it… I think about it all the time because people that are like global idols say these things to me and about me that are the most crazy sh-t I’ve ever heard! I don’t know how to process it or believe it, you know, it doesn’t feel real to me. When people say, ‘Live in the moment’, it’s really hard … I feel like whenever I have tried to make it a point to be in the moment, all I’m thinking about is if I’m in the moment or not.”

She doesn’t want her image to be about her image: “It really sucks for me to have the image be important. I wish I could just be like: ‘Oh, I don’t care. You guys do it.’ You know? But the thing is that I’ve done that before and it doesn’t make me feel good. It doesn’t satisfy me. So it’s a ton of work to try to control the image and you can only do it so much, because people are gonna think whatever they think. But it has been so vitally important to have the image that I want, and try to be seen how I want to be seen. Of course, it didn’t really work. It’s really hard to control the narrative in a position like mine, right? You can’t really control it that much, but you can try.”

On the past year: “I’ve just been so much more comfortable in my own skin and confident with my writing and voice. I just have loved growing up and loved changing and getting older. It’s just been the best thing ever to grow up.”

Yeah, I’m still embarrassed about stuff I did and said when I was 15 years old. And 19 years old. And 22 years old. And 30 years old. You never stop being embarrassed about that stuff, honestly, but you do learn how to let it go. All of that bad fashion, all of those trash opinions, all of that bad hair? Forget about it! You can’t change it now. As for this: “I just have loved growing up and loved changing and getting older. It’s just been the best thing ever to grow up.” That’s what made me think “youth is wasted on the young.” When you’re that age, you’re in such a hurry to “grow up” and be an adult and be taken seriously and do all of the grown-up things. Then you get there and no one has their sh-t figured out and adults behave like immature a–holes and you realize you should have enjoyed your youth while you had it!

09/24/2021 Celebrities Comments Off on Billie Eilish: ‘Everybody is incredibly embarrassed & ashamed about their past’
Recent Posts