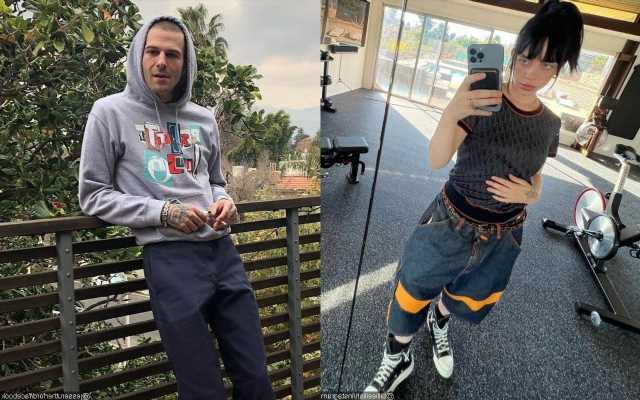 When stepping out to the LACMA Art + Film Gala 2022, the ‘Bad Guy’ hitmaker and her boyfriend were seen smiling ear-to-ear as they wrapped in a Gucci blanket.

AceShowbiz –Billie Eilish and Jesse Rutherford have made their romance red carpet official. When stepping out to the LACMA Art + Film Gala 2022, the “Bad Guy” hitmaker and her boyfriend were seen smiling ear-to-ear as they wrapped in a Gucci blanket.

At the Saturday, November 5 event, the 20-year-old and The Neighbourhood frontman put on a loved-up display when posing on the red carpet. In one of the pictures surfacing online, the twosome could be seen staring at each other lovingly.

Billie sported a sleeveless nightgown trimmed with lace and paired with a floor-length robe for the outing. Jesse, in the meantime, wore a shirt and pants in the same logo-covered silk. Both had on Gucci shoes as well, while the Oscar winner completed her look with a monogrammed eye mask.

Billie confirmed her relationship with Jesse earlier this month by posting several pictures from her Halloween celebrations. The last snap showed her posing with her beau, where she dressed up as a baby in a colorful outfit and fluffy bunny sandals as well as heavy makeup with a bold pink blush.

Many people believe that the couple chose the costumes to poke fun at trolls who criticized their age gap. “LOL, laughing so hard at the reaction to this. Everybody is calling him an old man and making billie into a baby, so,” one person commented after their pictures were first published by Pop Crave on Twitter. Another added, “this is so f**king weird.”

The pair were first linked romantically after they were spotted holding hands at Universal Studios’ Halloween Horror Nights on October 14. In a video that has been surfacing on TikTok, the “No Time to Die” hitmaker and her rumored boyfriend were seen walking out of a haunted house together. Her brother FINNEAS was also with them.