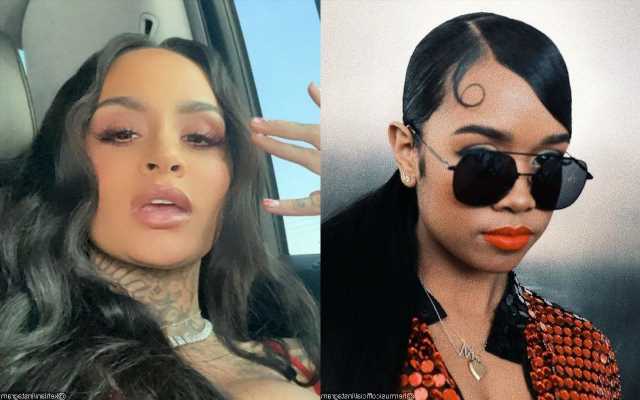 At the award-giving event that takes place at the Microsoft Theatre in Los Angeles, the famous names in music further emphasize their star status by bringing some serious style on the red carpet.

AceShowbiz -The 2021 Billboard Music Awards is here. Taking place at the Microsoft Theatre in Los Angeles on Sunday, May 23, the big night in the music industry honored the best musicians and prior to that, famous names in music further emphasized their star status by bringing some serious style on the red carpet.

H.E.R. arrived on the red carpet while looking dazzling in a red sequin jumpsuit that she paired with her signature aviator sunglasses. As she deliberately didn’t fully zip up her zipper, it allowed the “Best Part” hitmaker to show some cleavages and added some sexiness to her look that night.

Also opting for red for the event was Kehlani. The “Gangsta” singer donned a Tony Ward couture two-piece set, which featured a crystal bustier and puff sleeve. She completed her look with Bulgari jewels. Meanwhile, Doja Cat turned heads in a black-and-white two-piece set. She accesorized herself with a Jacob & Co. turquoise pendant necklace while completing her look with a quirky makeup.

The Weeknd was also among the stars who hit the red carpet for the night. The “Blinding Lights” artist looked dapper in a white shirt and a long black coat. As for Jonas Brothers, they went colorful for this year’s BBMAs. Host Nick Jonas opted for an all-green outfit. His brother Joe Jonas looked simple in a black-and-white ensemble while Kevin Jonas paired his blue jacket with a pair of black leather pants.

Alicia Keys was gorgeous as she donned a Valentino pink suit and voluminous cape-style coat. BTS (Bangtan Boys), who won Top Selling Song with “Dynamite” at the award giving event, looked stylish as ever in black suits.

Looking sexy for the night was SZA who donned a black number featuring cutouts through out the front site. Karol G also flaunted her curves in a sparkling see-through gown with an open back. She also showed off her abs as the dress had a big cutout in the midsection part. Meanwhile, Saweetie was beautiful in a peach Giambattista Valli Couture high-low gown with floral detailing.

The 2021 Billboard Music Awards is currently underway. Among the winners are The Weeknd and Taylor Swift as they were named as Top Male Artist and Top Female Artist respectively.

05/24/2021 Celebrities Comments Off on Billboard Music Awards 2021: H.E.R. and Kehlani Stunning in Red While Gracing on Red Carpet
Recent Posts