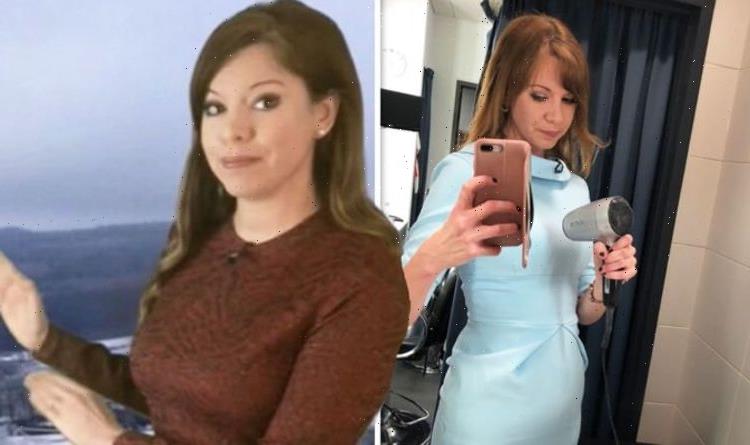 BBC weather forecaster Elizabeth Rizzini shared her annoyance after an unsuspecting beverage landed all over her. The meteorologist, who presents the forecast on BBC London News, addressed the incident in a candid new admission.

Elizabeth often presents the weather forecast at Wimbledon which she admittedly loves to front.

The mum-of-two recalled the moment she suffered a wardrobe disaster, just minutes before going on-air.

The small-screen star admitted she was left unimpressed but added it had been a bit of a “party year” at the annual event.

Addressing the incident, Elizabeth explained: “At Wimbledon, somebody poured a load of Pimms over me. I was really annoyed about it.

“Not live on-air but in the dress rehearsal.”

She continued: “The following year they were checking people’s bags to see how much alcohol they were bringing in. It was a party year that one.

“Some guy thought it would be really funny to pour his drink over me so I was a bit wet when we went on-air.”

As the on-screen star delivered her weather update, Elizabeth said security was soon on hand.

“There was a big burly security guard standing right behind me just out of shot,” she admitted.

Elizabeth often presents the forecast at Wimbledon but was unable to this year amid coronavirus restrictions.

The forecaster explained that the BBC had not been issued with as many media passes like previous years.

Meanwhile, Elizabeth, who is the proud owner of two cats Mabel and Louie, is now a judge for the National Cat Awards 2021.

Speaking about the awards, Elizabeth said: “It was difficult to pick between the ones that were given to me, the stories.

“Because how can you possibly decide whose story is more powerful than someone else’s?”

She continued: “There was a lady whose cat basically picked her up again when she had a stillbirth. There was another little lad who takes comfort with his cat.

“The other stories were equally as powerful. I think it’s just about people being comforted by their animals.”

“They’ve been brilliant over the lockdown,” she gushed. “I just love cats. I’ve always had them.”

Elizabeth added: “Cats Protection invited me to their judging for the National Cat Awards 2021 and of course I agreed.”

The National Cat of the Year winner will be announced on Cats Protection’s Facebook page on Thursday 12 August. To find out more, visit www.facebook.com/catsprotection/

Cats Protection is the UK’s largest cat charity, helping around 200,000 cats every year through a network of 37 centres and around 210 volunteer-run branches.