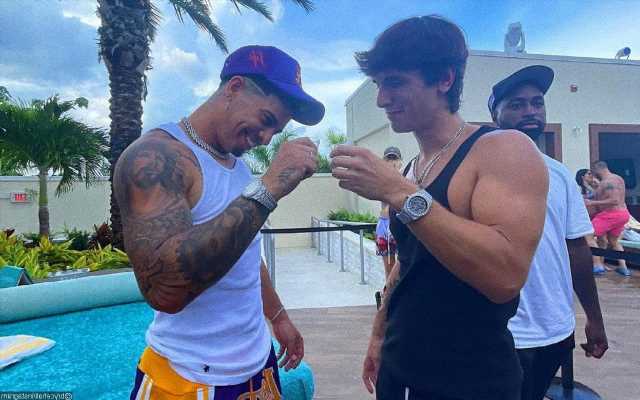 Youtube star Austin McBroom stands out among fighters during the match between fellow YouTubers and TikTok influencers as he mercilessly beats TikToker Bryce Hall.

AceShowbiz -YouTuber Austin McBroom swept the floor with TikTok favourite Bryce Hall on Saturday night (12Jun21) as the two topped the bill at a fight night featuring the influencers of the social media platforms.

McBroom dominated the fight before the referee stopped the action in round three as the blows rained down on his struggling opponent.

Both stars are believed to have pocketed $5 million (£3.5 million) for the fight, which topped a night of boxing action, in which YouTubers won five of the seven matches.

Tayler Holder and AnEsonGib‘s fight ended in a tie and Tanner Fox‘s match against Ryland Storms was cancelled.

Storms claimed Fox backed out of the fight due to the weight difference between the two influencers.

In a YouTube video at the Hard Rock Stadium in Miami, Florida, where all the fights were held, Fox said, “I showed up today to talk to everybody on the team and, like, try any possible way. I said we could wear headgear…, I would sign a death waiver just so that me and Ryland could continue and do our fight today, and the commission was all of a sudden not having it. All I heard was that this was an exhibition and that it didn’t matter and I accepted the 20 pound difference between me and my opponent and today they couldn’t make it happen.”

“I’m not sure why but the commission was all serious about it.”

“We’re definitely still beating Ryland’s a**. It’s just they wouldn’t let me do it today.”