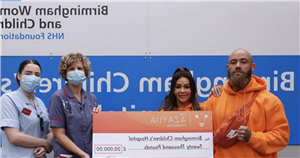 Ashley Cain and Safiyya Vorajee have returned to Birmingham Children's hospital for the first time after their daughter Azaylia's death.

The couple tragically lost their little girl as she passed away earlier this year following her brave battle with a rare form of leukaemia.

Since their daughters passing, 30 year old Ashley and Safiyya, 34, have set up The Azaylia Foundation in memory of their daughter, who was just eight months old when she tragically passed away.

Months on, the couple have returned to the hospital where their daughter was treated for the first time after her death for a special reason.

Ashley and Safiyya, who recently called their baby girl their hero in their first TV appearance, donated £20,000 to Birmingham Women's and Children's hospital from The Azaylia Foundation.

The couple posed in orange hooded jumpers alongside hospital staff with a large cheque which is also orange, the colour the couple use to remember their baby girl, in photos shared on The Azaylia Foundation's Instagram page.

Another photo sees Ashley and Safiyya stood with friends and family, who are also dressed in orange hoodies outside the medical facility.

As the photos were shared on The Azaylia Foundation's Instagram page, they wrote: "We are really excited to share this with everyone" followed by an orange heart emoji.

They continued: "On Tuesday's launch, @miss_safiyya_ and @mrashleycain visited Birmingham Children’s Hospital to gift them with a £20,000 cheque."

"It was the first time the couple had been back to the hospital since Azaylia passed so it was a very emotional day for all," the post went on.

"Birmingham Children's Hospital was a second home to Azaylia; the treatment, love and care received from the NHS staff was exceptional and this is why it was so important for the foundation to give back.

"This is just the start of donations from The Azaylia Foundation, we have pledged to be on the ground, raising even more funds to help give back to children fighting cancer and those that help them."

The touching donation received wide praise from celebrity supporters including Georgia Harrison who penned in the comments: "so proud" followed by two red heart emojis.

Ashley is currently on a 1,000 mile bike ride across the UK to raise money for The Azaylia Foundation.

Before embarking on the incredible journey, Ashley told Sky News: "We're going to take Azaylia from north to south, east to west.

"My journey with Azaylia was confined to a hospital room and this is my chance to be outside and be one with the sky where I believe she's watching down on me and take her on a real journey now."

For all your updates on Ashley Cain, Safiyya Vorajee and many more of your favourite stars, sign up to our daily OK! newsletter.

09/04/2021 Celebrities Comments Off on Ashley Cain and Safiyya Vorajee return to hospital for first time after Azaylia’s death to donate £20,000
Recent Posts