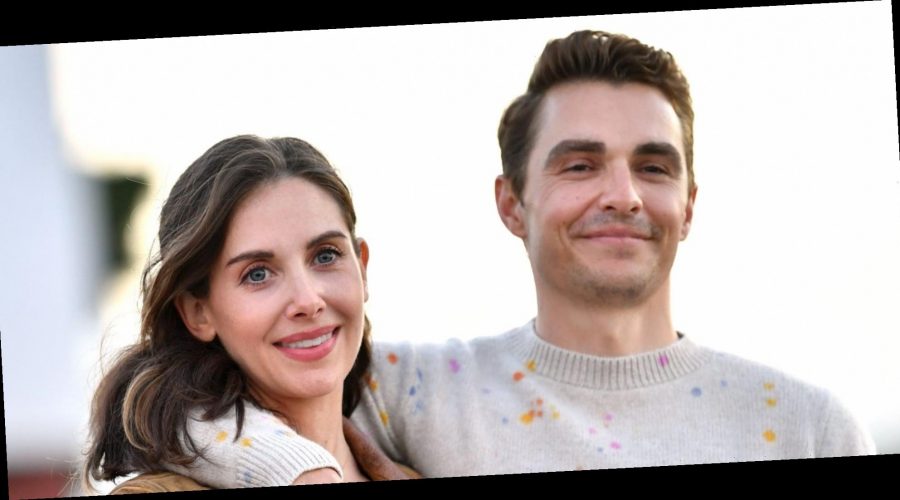 It's easy to forget that Alison Brie and Dave Franco are married — and that they've been together since 2011. One of Hollywood's most under-the-radar couples, they managed to keep their romance a secret and have a low-key wedding, all while working together, too. Here's everything from their first date (Maybe calling it a bender would be more accurate?) to their two cats and all the skits, movies, and red carpets between. The two meet at Mardi Gras. During an appearance on The Tonight Show With Jimmy Fallon in 2020, Brie explained that a mutual friend set them up.

"The two of them are friends and she had invited him out to dinner with us there … he was sitting next to her across the table and … my friend texts me under the table and was like, 'You should hook up with Dave,'" Brie said. Her response? Thumbs-up emoji. The result? She told Fallon that "it was 48 hours of drugs and sex, a lot of making out."

In the same interview, Brie says that they met up later that year and he invited her to Paris — by leaving a note in her sweatshirt. She said yes.

"We had known each other for three or four months and then it was his birthday and I wanted to do something special for him," she told Seth Meyers. At the time, she didn't know that Franco hated surprises, so it wasn't the best idea. He elaborated during an interview with Fallon, saying, "Alison and I still talk about how if we could survive my surprise party, we can survive anything."

Brie says that she knew early on that Franco was the right fit. Reflecting back on their relationship, she says the one-year mark solidified it for her.

"There was a semi-immediate click. Probably about a year into our relationship I was like, 'Oh wow, this thing I thought I maybe never would do, I could definitely see myself doing it with you,'" she told Metro.

The two are photographed holding hands.

Brie told Metro that about a year in, the relationship felt like it was getting pretty serious.

The two appear on-screen together in a Funny Or Die skit called "Dream Girl."

Franco and Brie attend the Dior Homme fashion show together in Paris. The event is their official red carpet debut.

E! News reports that the two are engaged. James Franco confirms the news on his Instagram account in a now-deleted post. "Congrats Davy and Allison!!! Engaged!!! I WUUUUUUV YOU," it read.

Brie explained to Larry King that the proposal was a complete surprise.

It happened in Big Sur, California. When Franco got down on one knee, Brie said that she was so shocked that she started laughing and had to ask him if he was serious about what was happening.

The two make another red carpet appearance as a couple at the premiere of Brie's movie, Sleeping With Other People.

Brie and Franco get married. It was a secret ceremony, so details are scarce, but Franco told Entertainment Tonight that it was "intimate" and "really fun."

Earlier, in 2016, Brie had told Yahoo that she wasn't that interested in having a big wedding. She actually described herself as "not very bridal" and explained that she wasn't getting too into planning.

"I just met that person that I was like, 'Well, I'm really in love with you and would like to grow old with you,'" she said. "I actually think it's much more romantic when two people are like, 'Oh, I could go either way on marriage, but I want to marry you.'"

The Little Hours is released. It's the couple's first film together. Brie plays a nun and Franco plays a man that visits her convent.

In an interview with The Hollywood Reporter, Franco said that the film taught him and Brie that they shouldn't watch each other film sex scenes.

"Brie should not be on set while I film sex scenes with other women," Franco said. True to form, Brie said that she stepped away during those intimate moments.

The two attend the premiere of Brie's Netflix series, GLOW. Franco says that he'd almost resigned himself to being single forever. Then, he explains, he met Brie.

"I don't know how I became the quirky cat guy," he told Jimmy Fallon. "At one point in my life I was the single guy with two 16-pound cats. It definitely weeds out a lot of potential dating partners. Alison [Brie] loves them, thank God. She was really the only option [for marriage]."

He talked about his cats again during a later appearance on The Ellen DeGeneres Show.

The two return to the screen together in The Disaster Artist. James Franco happens to be the director, so there's a family connection.

Brie told Hello Giggles that she loves working with her husband: "It's so nice to work with your person, to be on set with someone who is the person you feel the most comfortable with in the world." Franco and Brie attend the SAG Awards together.

Brie explains that she doesn't plan on having children.

"It's great because I don't worry about when should I get pregnant — between seasons, while we're shooting the show — I don't think about it every day," she told The Sunday Times.

She noted that she and Franco have two cats, Harry and Arturo, and that they're enough of a "handful."

"It would be nice, but I think of all the things that would be so stressful. I think about how much we're involved in our cats' lives," she added. "Oh my God, if it was a child!"

The two attend the SAG Awards and Golden Globes.