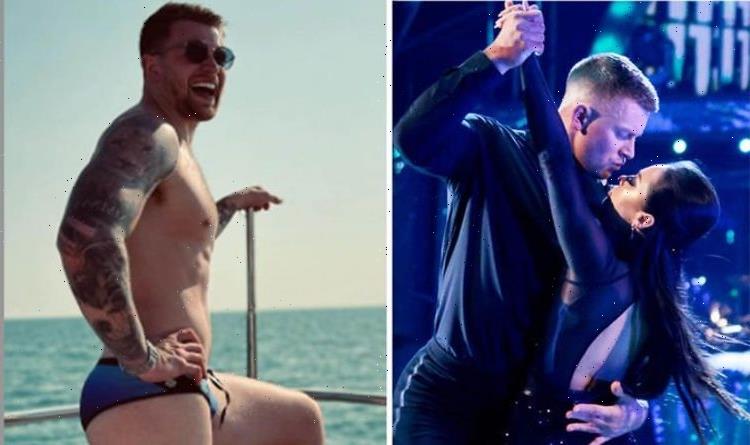 Strictly: Adam and Katya discuss their 'near kiss' during tango

Adam Peaty, 26, escaped to Dubai with his girlfriend Eiri Munro, 23, and their one-year-old son after she was booted off Strictly Come Dancing. This comes after Adam’s relationship with dance partner Katya Jones, 36, caused controversy amid what some viewers thought was a “near-kiss” during a dance on the show.

I forgot my swim shorts.

The couple have kept their fans updated on their holiday, regularly posting snaps of their sunny break.

On December 6, Adam showed off his toned body to his 595,000 Instagram followers, wearing small speedos.

He captioned the post: “I forgot my swim shorts.”

Fans took to the comments to compliment Adam on his humorous display.

Geordielen84 said: “Think I speak for many when I saw ‘thank your forgetfullness for me’.”

Awm1982 added: “Need to change your name to Adam Peachy.”

Adam’s Dubai break comes after he was booted off Strictly, with Adam and his girlfriend being in a rollercoaster ride since.

The Olympic swimmer sparked some conversation with Strictly professional Katya after the pair ended up close together at end of one of their dances.

Eiri admitted she was left in tears by comments she faced after the episode aired.

The Strictly pairing performed a passionate tango that ended with Adam appearing to lean in.

Eiri, who received a barrage of comments after, joked about it online at the time.

This was in a TikTok titled: “Watching your boyfriend almost kiss another woman on live TV.”

She later admitted that she was left in tears, saying: “People seem to forget we’re real people when they make these comments.

“I burst into tears at the cruelty.”

Adam spoke out at the time about the “hateful messages” he had received after his Argentine Tango.

When it comes to trolls, the swimming champion admitted that he has considered whether or not to respond when “someone with five followers on a fake account” targets him.

“But at the same time, I’m like, they’ve obviously got more things going on in their life than I’ve got in mine, if that makes sense if they need to send hate to me.

“Cause I get a lot of hateful messages, especially on the Argentine Tango. But I actually realised, I’m just trying my best to be a dancer here,” he told Metro.co.uk.

Following the hotly debated Argentine Tango that he and Katya delivered a couple of weeks ago, Adam revealed he “didn’t think anything of it” until he saw Twitter, which erupted with reactions to what appeared to look like an “almost kiss”.

He continued: “That is the honest truth, because I was so in the moment and I loved the dance and we performed the dance, we did our best version that night, and I think it was incredible,” he said.