The branch, if you can call it that, extends about a foot from the tree in Bob Odenkirk’s backyard in Los Angeles, and a few years ago the 58-year-old actor paid no attention to it. But on a sunny fall morning, he’s staring it down, a wry smile on his face. It’s pullup time, and this barely grippable chunk of wood is his bar.

Odenkirk reaches up, grabs the branch firmly with both hands, tucks his knees to his chest (yes, he’s got core strength, too), and cruises through five reps. “Pullups are one of the hardest exercises,” he says, “but if you can—and I’ve become able to—they’re fun to do.” 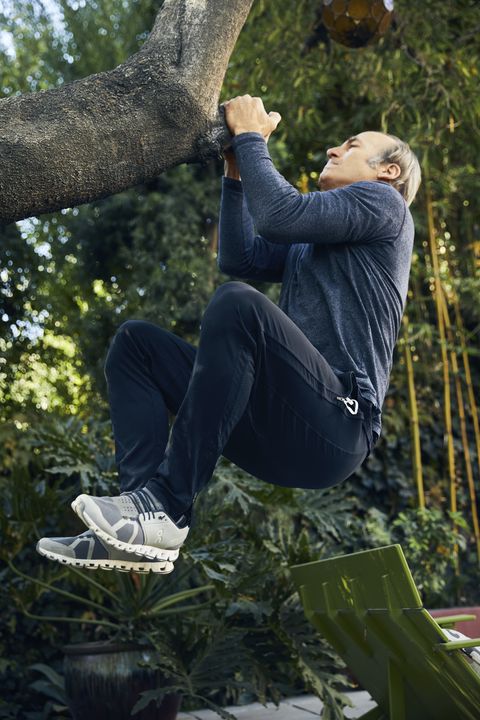 You’d never expect such bragging from the mild-mannered Odenkirk. He’s played a variety of roles throughout his career, getting his start as a 1990s alt-comedy writer and performer and evolving into a serious actor on shows like Breaking Bad and Better Call Saul, in a series of parts that required zero physicality. For much of the past decade, he’s embodied Saul Goodman, a physically unimposing defense attorney who does not kick any ass. But in Nobody, a new action thriller, Odenkirk plays an unassuming father whose lethal skill set—think Liam Neeson in the Taken series—emerges after a home robbery.

“Nobody ever thought I could do it,” he says. He describes the film as “unironic, extremely bloody, and gratuitously violent.” 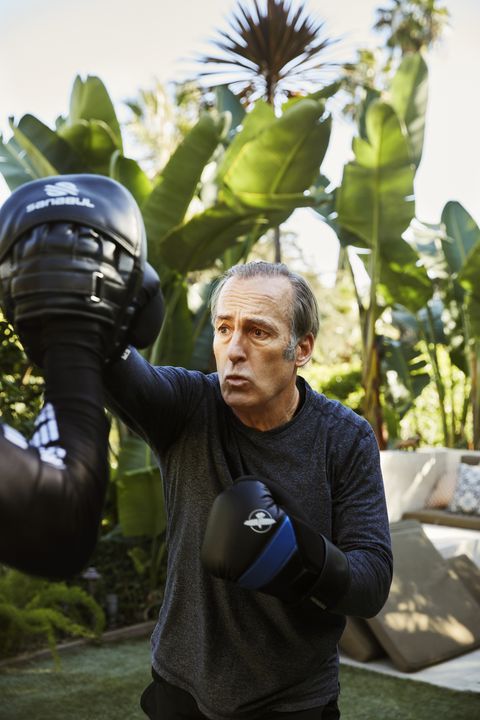 It was the ultimate test of the muscle he didn’t have—and it required three years of training.

Odenkirk started by pouring his energies into the gym. He decided to go to 87Eleven, the famed Los Angeles action-design company that sculpted Charlize Theron into Atomic Blonde shape and molded Keanu Reeves into John Wick. And yes, Odenkirk felt instantly out of place. “They were probably thinking I’d last a month, or that I’ll do the minimum and then let a stunt guy come in and take my place in fight sequences,” he says.

Thing is, the workouts felt good. Odenkirk connected with veteran action-stunt actor Daniel Bernhardt, who taught him the fundamentals of onscreen fighting, which include moves borrowed from the martial arts. 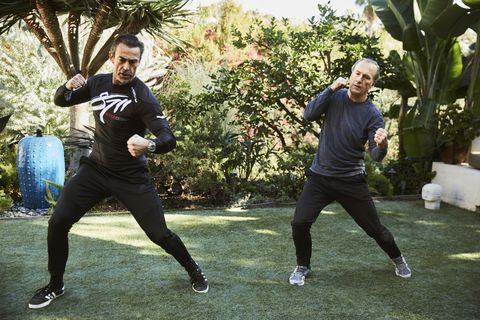 He also helped Odenkirk understand that cardio workouts made up of short bike rides and jogging weren’t worth his time and energy. He gave the actor basic home circuit workouts, teaching him exercises like jump squats, pushups, pullups, and bench stepups.

The more intense training awakened Odenkirk’s body. After a few months, he was doing fewer but longer and more challenging bike rides up a winding neighborhood hill. He’d follow up with Bernhardt’s mobility and upper-body exercises in his backyard.“You need renewed energy as you get older,” he says. “

Working out is where you can generate that energy.” And where you can dream of whipping Liam Neeson in Taken 4, too. “I’m going to take that guy down the next time I see him,” Odenkirk says. “So long as there is someone there to yell ‘Cut!’ so neither one of us gets hurt.”

Want more celebrity workout routines? Check out all of our Train Like videos.

This story originally appears in the March 2021 issue of Men’s Health, with the title “6 am with Bob Odenkirk”.