The idea that deeper squats are best for all fitness goals is strength training gospel.

That’s why Paul Fabritz, C.S.C.S., who trains many top hoops players, including James Harden, is a bit of a heretic. Fabritz, whose data-driven approach to training is likened to an exercise-science version of Moneyball, analyzed squatting research and did testing on force plates, which measure how much force a person can put into the floor.

What he found shakes the core of prevailing strength training’s holy scriptures. Deep squats are great for growing muscle. But quarter squats are better for explosive speed, actually mirroring your jump position. If your goal is vertical leap, adding them to your routine is seriously worthwhile; they can boost your athleticism in ways that classic deep squats simply can’t. The major reason why: Load in the range of motion you’re training.

Truth be told, when you leap, you never actually squat so low that your thighs get close to parallel to the ground. But squatting over that entire range of motion requires you to use less weight. Fabritz advocates for the quarter-squat in large part because it lets you use more weight over a range of motion that mirrors how you’d jump. You build more power over that smaller range—but it’s that power that helps you jump. Here’s more on the anatomy of the quarter squat: 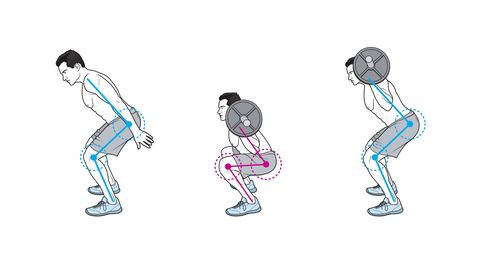 The lower you squat, the more your spine becomes the limiting factor. Says Fabritz, “You’re no longer even working on your legs.”

Deep squats are often riskier, leaving you limping out of the gym feeling beat down—without being any better at your favorite sport. Quarter squats keep your spine safer because you never drop low enough that you’re truly loading it. You are, however, loading the critical thigh muscles that drive your jumping ability.

The higher part of your quads is critical for jumping, says Fabritz. Quarter squats let you hit those muscles with heavy weights, and stay focused on those muscles. When you drop into a deeper squat, the hamstrings and glutes wind up playing a much larger role, which isn’t a bad thing, but does sometimes prevent you from hitting your upper quads. You have other weapons to build hamstring and glute power (deadlifts and cleans), so let the quarter-squat focus on those quads.

Key number: 1.75. Fabritz starts his players in easier quarter-squat variations. Once they can do 1.75 times their bodyweight, he moves them on to harder ones. Begin with a classic two-leg variation, then move to single-leg variations, such as barbell Bulgarian split squats.

Hoops players have 0.2 seconds to jump off the floor for a shot. You also want to jump fast, so you should train strength and speed with minimal knee bend. You get to do that in Fabritz’s quarter squat.

The classic deep squat, which requires much more knee bend, doesn’t let you focus on velocity of movement as efficiently. It’s a slower exercise. Does that have a place in your routine? Yes, because it builds strength and resilience. Keep classic squats in your routine in the long term, but now you know all the reasons you should keep the quarter squat around, too.

A version of this story originally appears in the March 2021 issue of Men’s Health, with the title “THE NEW SCIENCE OF SQUATTING”.